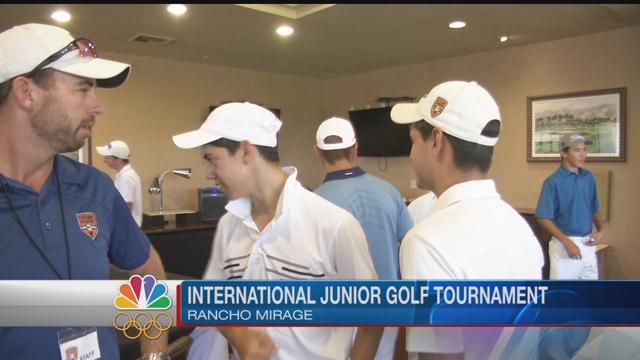 Anyone watching The Open Championship on KMIR this weekend saw breathtaking golf and an impressive first major win for Henrik Stenson.

And anyone who swings by Mission Hills Country Club or the Westin Mission Hills Resort courses will see the Future Champions Golfers teeing off.
The top junior golfers from the around the world are in Rancho Mirage.

"We have 280 kids here this week from 25 different countries," says organizer Chris Smeal. "It’s very competitive here from ages 5 to 18."

The Futures Champions Golf tour hosts hundreds of players in a series of events, this is the 8th year of their World Championship series, and the first time they’re playing at the iconic Mission Hills Country Club.

"So you just played where the greatest women of all time have played." A 15-year-old player from Hong Kong is told.

"Really? I didn’t know that," TaiChi Cho says. "That makes me feel so much better about playing this course then."

"I think it’s just a cool experience," says Smeal. "The pictures on the wall, the history that’s here, it’s just special. So hopefully next year when they watch this tournament on TV, they can remember the holes they play."

Even the younger divisions are highly competitive, a girl playing in the 13-14 year old division scored a 64 on the Pete Dye Course at Westin Mission Hills.

"It’s a little nerve-wracking," says 11-year-old Arden Loucaheim from Utah. "It’s a world championship and people from all over the world are here."

And it wasn’t just the level of competition, these sophisticated athletes noticed the different playing surface.

And just when we think the summer temperatures make it tough to play golf.

Boet says he shot 2 under par on the Dinah Shore course Monday to try to keep up with the youngster who shot a 64.
The the tournament continues through Wednesday. And there will be a cut after Tuesday’s action, so the players will be fighting elimination.
Admission is free to the public. You can find more information HERE.