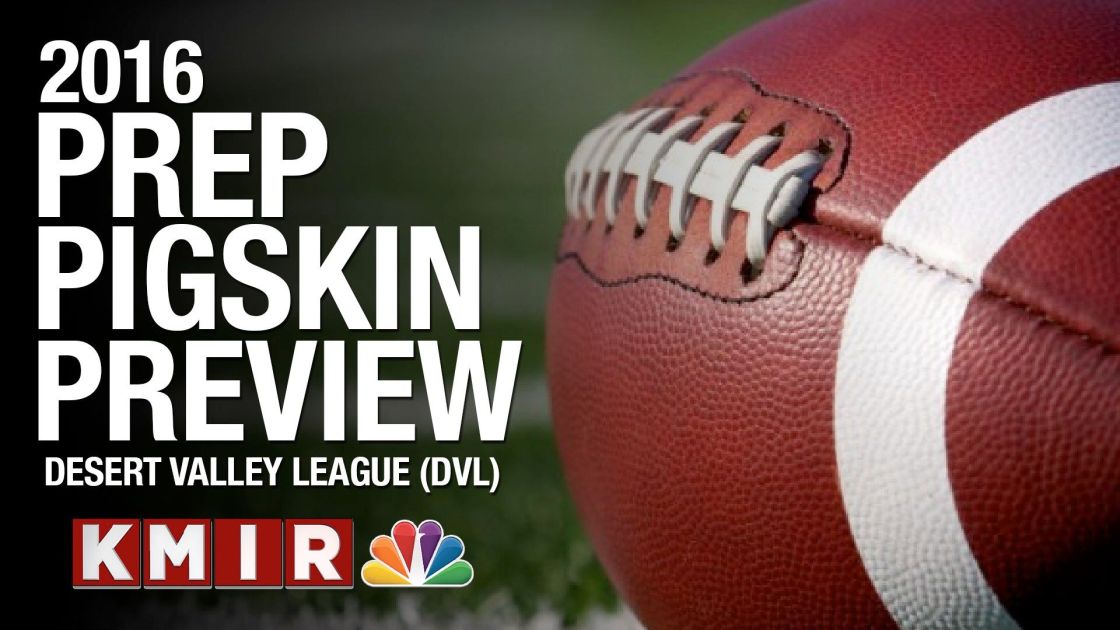 Let’s begin with the defending DVL Champs. No question last year’s road playoff loss to Oak Hills was a bitter pill to swallow for an immensely talented senior class of players. And what’s left is a young team with little big-time playing experience, but plenty of motivation to learn from that same bitter pill.

Enters Josh Barlow. A key to last year’s success, he brings his speed at the running back position and the team will rely heavily on him.

Coach Dan Murphy has some new techniques learned over an off season of research and study by himself and his coaching staff and considering they’re one of the most cohesive coaching staffs in the valley, these perennial championship contenders can expect an exciting season. Their preseason schedule is difficult with key match ups in their playoff division, but they should be in the playoffs and be able to start building experience with this new crop of talent and keep Ralph Watt Stadium rocking all year long.

While most teams in the DVL saw massive turnover at key positions, La Quinta has the majority of it’s starters returning and most notably, it’s head coach.

Flirting with retirement the past few year, head coach and athletic director, Dan Armstrong is on the record saying this is his final year of coaching and he expects to finish the season with a victory.

This team has the most depth of any squad in the valley and they’re adding some versatility on offense, planning to incorporate some Wildcat option plays with Justin Anderson at quarterback.

Boxing megastar Timothy Bradley Jr. has been added to the coaching staff and Armstrong says he’s brought new perspective and a fresh set of eyes. This team is expected to win the league, thanks to the amount of returning starters and talent, but that’s not enough for Armstrong.

He wants a CIF Title. We’ll see if his players can deliver.

Pat Blackburn coached at Palm Desert more than 2 decades but he says ending his tenure with a win over La Quinta and the rivalry flag was one of the most special moments of his career.

Palm Desert players delivered a 27-20 win over heated rival, La Quinta to deliver the Flag back to Cook street and Blackburn decided that was a good point to end on. He announced his retirement some months later.

A stocky-built man who looks like he could still play linebacker, McComb shakes of questions about his youth and points to his discipline and ability to get the most out of his players.

But this team has more questions than perhaps any other in the DVL. They have talented athlete, but how each player will be used in McComb’s schemes is up in the air.

Other coaches say he’s “creative,” McComb says he “gets the most out of his player.”

We’ll say, the sky’s the limit for the Aztecs.

The Lions are a lock for most improved team in 2016. And while that might seem flippant, given their disappointing 1-9 season, there were a lot of reasons for those 9 losses that were fixed in the off season.

Their talent has matured. And it’s good. Really good. Cameron Lee and Jordan Wallace are exciting athletes ready to lead this team past their disappointing year. Jordan, the younger brother of CCHS great Orlando Wallace (Dixie State RB now) says it was tough playing in his brother’s shadow, but now that this is HIS team, he’s ready to showcase similar speed and explosiveness.

They’re playing in Division 12 and as long as they stay healthy, this will be a playoff team and a team that should pack the stadium every week.

It’s amazing that the Saints, with a student body a quarter of the size of some of the other teams in the DVL are usually in contention for a playoff spot. It’s largely thanks to the quality of athlete the Saints field as starters and the kind of offense they run. They use space unlike most teams in the DVL and create opportunities for their speed to equalize the size advantage most teams have over them.

Quarterback Michael Johnson has an even better grip on this offense, saying the rhythm he enjoys with his receivers really began clicking in June and Spencer Conley, at 6’3” will be a go-to target all season long.

The Saints starters vs starter against any other team in the league could go toe-to-toe. How well conditioned they are to sustain their speed and explosiveness through all 60 minutes will mean the difference between a Division 11 playoff berth or not.

The Knights don’t see themselves as the new kids on the block any more now that Rancho Mirage High School took that mantel. But they are new to the DVL. But, knowing they’d be making the move the past 2 years, the Knights have scheduled DVL opponents in pre-league match ups and did very well.

Generally, a run-heavy offense, this year’s version will take to the air. Quarterback Seth Morales throws one of the prettiest balls in the valley and as long as his line can protect him, expect the Knights to make big plays. They’ll look for some balance in the running game with Ben Valencia and Kaleb Welmas, but it won’t be like the days with James Toland or Tony Williams.

But this year, one of the most impressive student sections in the valley will once again have plenty to cheer for.

The Rajahs are an incredibly proud fan base, as is evident yearly with the Bell Game. After last year’s 1-9 campaign, coach Marty White is grasping at straws looking for help.

Sandwiched between Shadow Hills and La Quinta High Schools, Indio’s pool of talent is limited. They have a difficult time finding players that will stick it out for the years required to play competitive football. Case-in-point: Seth Morales. A talented quarterback who transferred from Indio to Shadow Hills and is now the starter for the Knights.

When the tides turn for the Rajahs football team is anyone’s guess, but there’s no questioning White’s desire and dedication to his team.