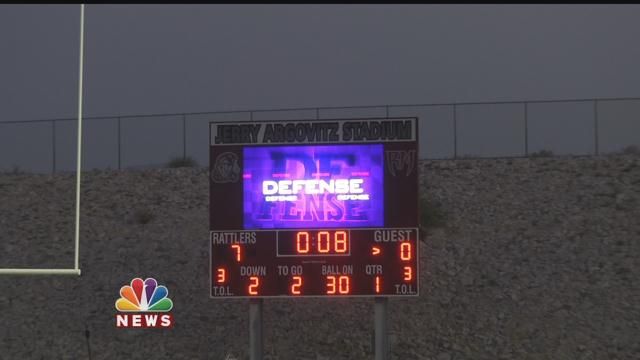 When driving past Rancho Mirage High School as the Rattlers’ football team takes the field, you’ll likely see the Coachella Valley’s only video scoreboard lighting up the night’s sky. But the story behind that unique and remarkable piece of technology, it’s a shining example of how an act of generosity can change many lives.

It’s really a love story.
"Everybody tells me how much I’ve done for the kids, I think they’ve done more for me than I have for them," says Dr. Jerry Argovitz.

"What better way than to have the JASI Program, the Jerry Argovitz Sports Institute, have him teaching, keeps him busy. He can’t golf all day," says Loni Argovitz, Jerry’s wife. But he’s quick to add, "I wasn’t that good anyway."

Jerry Argovitz, after a successful career as an NFL agent, teamed with his wife Loni to launch a leadership program at Rancho Mirage High School that teaches athletes how to accomplish their dreams beyond sports.

"We tried to give them the ability to see how you could have a good life, be somebody and not be playing football," explains Loni.

As the JASI program developed and their love for the school grew, the Argovitzs decided to make a donation and name the Rattler’s home, Jerry Argovitz Stadium. But Loni didn’t stop there.

"Well, once the stadium was named after Jerry, I wanted it to be a special place." Loni tells KMIR. "And what he deserved out of his legacy, his life, to be special."

While it was Loni’s love for Jerry that propelled her donation, her love for the students at Rancho Mirage, that kept the lengthy and involved process going.

"We got it done and it is wonderful," Loni explains.  "The kids love it. We’ve gotten letters from grandparents how much they enjoy coming to the game, what it’s added and it’s given Rancho Mirage what they deserve, something special."
Calderwood says they’re hoping to create a class and have the video board totally student run.

In all, the Coachella Valley’s only video board cost nearly $250,000. Loni says nearly half of that was just installing it and the equipment to run it.

The Rattlers are at home Thursday night against Palm Desert.