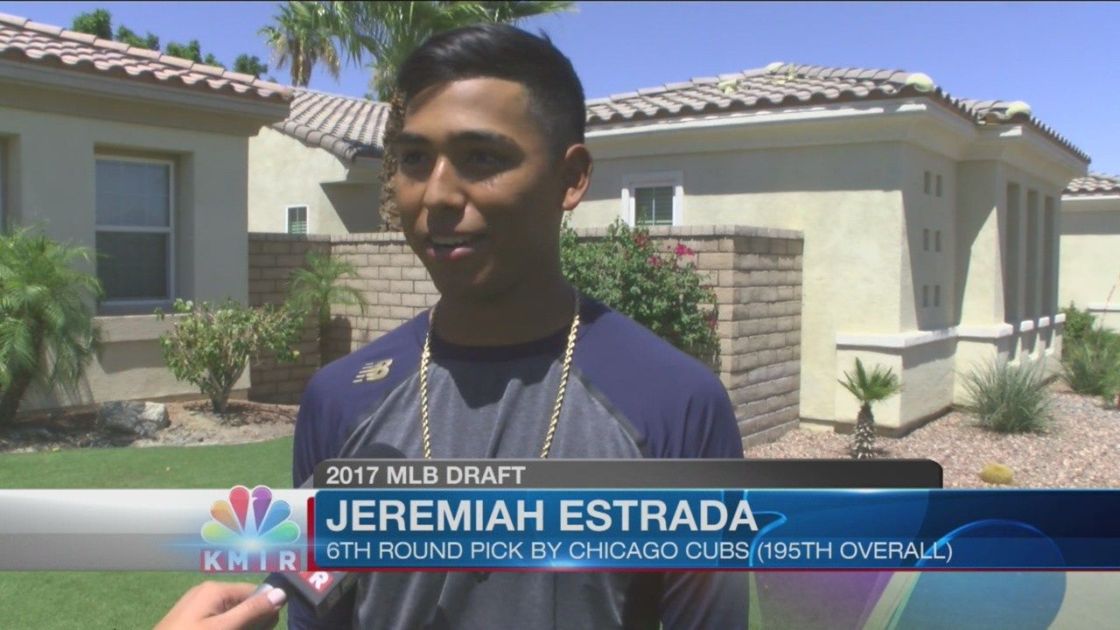 The waiting game is over for the Palm Desert Aztec standout right hand pitcher, Jeremiah Estrada, as he was selected by the Chicago Cubs this afternoon in the 6th round of the 2017 Major League Baseball draft as the 195th overall pick.

"They called me on my phone and were like ‘Hey man congrats you’re a Cubbie’,” Estrada explained. “I was like ‘thank you, I appreciate it’. He was like ‘are you going to come out here and work out?’ I was like ‘yes sir, I won’t let you guys down. I’ll give you a good reason why it was really good to pick me and I’ll give you another reason why you should’ve picked me earlier’ but we’ll see what goes on."

Estrada was predicted to be picked on day one of the draft but for him, a number is just a number.

"I mean I thought I would kind of be up there,” Estrada said. “It honestly doesn’t matter. Like yeah, a number’s a number. I’m drafted, I got to thank God for that and we’ll see what goes on with my decision."

The decision being to go to UCLA or join the defending world series champion organization.

Estrada committed to UCLA his sophomore year and has had his mind set to be a Bruin since.

"For the education, that’s what I want to go there for and honestly yes I’ve heard coach Savage is just one of the most unbelievable pitching coaches in the world,” Estrada said. “And obviously the program and just the school is historic and I want to be part of that program. Like Jackie Robinson has played on that field and I also want to play on that field. But we’ll see what goes on and I can’t wait. And if I make that decision, I’m going to go out there and work hard as well."

Wherever Estrada goes, he plans to represent the Coachella Valley to the best of his ability.

"I’m going to do as much as I can to go out there, make my way up there, and at some point, they’re probably going to say ‘Where you coming from?’ and I’m going to say ‘Coachella Valley, Palm Desert, La Quinta, that’s where I grew up and was raised.’ And I’m just going to represent this Valley and I really appreciate and thank everybody who has believed in me to get to this point."