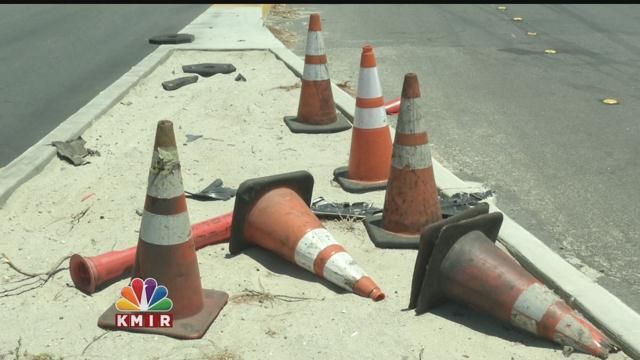 A traffic median in Palm Springs remains in disrepair after a drunk driver destroyed the welcome portal in March. On Wednesday night, the city of Palm Springs will consider removing the median and replace it with something else.

"Last night when I drove by it was gone. It was being dismantled I was wondering why because I know it costs a lot of money to put those portals in," Price said.

According to Palm Springs Assistant City Manager Marcus Fuller, the cost of the sign was $130,000 dollars. Now all that’s left is old car parts, broken pipes and orange cones.

"We had to, out of an abundance of caution, pull out the entry sign lettering and the colored panels that were installed," said Fuller.

The sign was installed not only to soften the look of the street but also to signal your entry into Palm Springs. The city is just as disappointed as residents by the sign’s short lived moment in the sun.

"We got put a lot of effort and time into putting something like that to beautify the city streets and to have destroyed unfortunately in that way is unfortunate," said Fuller.

The city will try to recover the cost of replacing the sign from the drunk drivers insurance company. Price hopes that happens sooner rather than later.

"This was more of a work of art with a modernism theme. And I was sorry to see it go," said Price.