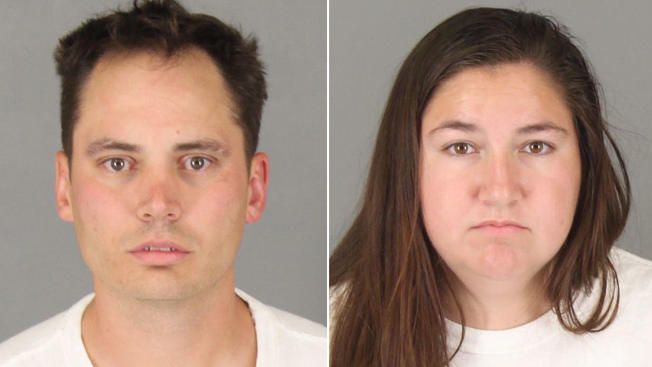 A Murrieta man and his live-in girlfriend were behind bars today on suspicion of severely abusing his 5-year-old son, who remains in an intensive care unit at a pediatric hospital.

Benjamin Matthew Whitten, 33, and Jeryn Christine Johnson, 25, were arrested Tuesday and booked on suspicion of child abuse and inflicting great bodily injury on a person under 10 years old. Whitten was additionally arrested for alleged torture of a minor, according to Murrieta police.

He’s being held in lieu of $1 million bail at the Byrd Detention Center in Murrieta; she’s being held in lieu of $75,000 bail at the Robert Presley Jail in Riverside. According to Lt. Tony Conrad, officers and paramedics police were summoned to 24001 Verdun Lane, near Mountain Pride Park, about 10 a.m. Tuesday regarding a child in medical distress.

Conrad said Whitten’s biological son was suffering from "severe injuries” that “required immediate medical attention.” The nature of his injuries was not disclosed. After the child was examined at a Temecula Valley trauma center, the decision was made to airlift him to Rady Children’s Hospital in San Diego for
specialized care. As of noon Wednesday, he was listed in grave condition, according to Conrad.

After questioning the suspects at length and searching their house, detectives arrested the pair. Conrad described living conditions at the Whitten property as "extremely unsanitary,” noting that 11 dogs, four cats and two fish were impounded by animal control officers.

The lieutenant said Riverside County District Attorney’s Office personnel were requested to assist in investigating the matter, and prosecutors are working on a criminal complaint, which will most likely be filed in Superior Court on Thursday.

A search of court records did not turn up any felony or misdemeanor convictions for either suspect in Riverside County.