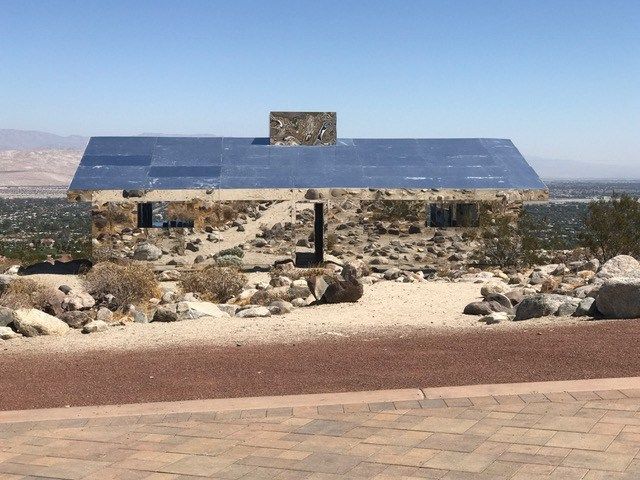 It was a big hit during the "Desert X" art show this spring. The Mirage house is covered in mirrors and perched over Palm Springs. However, the crowds it attracted overwhelmed the Little Tuscany neighborhood. Artist Doug Aitken applied for permit to keep it up until March 2018, but some neighbors are fighting the move, which means it could soon be demolished

It has become an iconic part of Palm Springs. The Mirage "mirror" House, designed by Doug Aitken, attracted people from all over the world. "It’s kind of a phenomenon internationally and across the U.S. So yeah, we want to keep it up," said Desert Palisades Construction Manager Tom Lynch.

However, the popular art exhibit is not so popular among neighbors. "I would like it to go away from here because of the congestion," said Herb Lewis, who lives down the street. "The young people stay and they party up here when it gets dark, so it becomes sort of a bad scene," said his wife Debra Lewis.

Lynch said he understands why neighbors are frustrated. "It’s understandable. We are actually in the process of working a plan that would even further alleviate traffic on Racquet Club," he said.

On the average weekend in season, Lynch said the Mirage House attracted over 500 cars. During Coachella weekend, over 3,000 vehicles tried to access the mirrored house. "The traffic horrendous. As a resident, it makes it really difficult, people park right out here on, and you can hardly get into your own house," Lewis said.

Now artist Doug Aitken and developers have two weeks to compromise with neighbors or find a new location. "We’re going to develop a pretty solid plan that’s vetted on all kind of contingencies and different issues that could come up, and we’re going to present that," Lynch explained.

Some neighbors said if developers can reroute traffic, it wouldn’t be an issue. "I think that if there’s an option that takes the traffic around the residential area, that would be fine with me," Lewis said.

The Palm Springs Planning Commission will meet on Sept. 27 to discuss the future of the Mirage house. It still remains closed to the public.