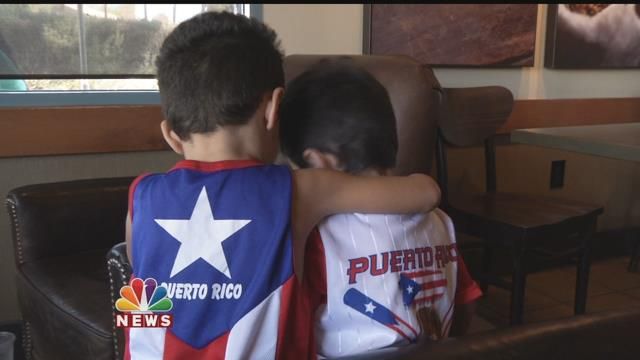 Kassie Ortiz is a proud Boricua. She’s trying to stay strong while her father, sisters and extended family are suffering in their native Puerto Rico.

"I just can’t even imagine what they’re going through … heartbreaking it really is," says Ortiz.

After the island was decimated by Hurricane Maria it took days to hear from her father. What she heard didn’t make her feel any better.

"It just sounded really chaotic, my grandma, my stepmom were crying in the background you know you could just hear people screaming … all he says is that it’s just destroyed that he he said that when you go outside it looks like you’re in a movie," says Ortiz.

But she says the worst part is that her 15-year-old nephew, Brian Ortiz is missing, "We haven’t heard from him we’re trying to get in contact with him … so if anyone knows where he is please contact us … that would be great," she says.

She says her father is helping others but is also having a hard time providing basic necessities for her nine and ten year old sisters. So she started a You Caring page to raise money and is collecting canned goods to send to her family.

"My main concern is getting food for them too because my dad was like, ‘I won’t eat me and your mom are fine we won’t eat, just your sisters need to eat," she says adding that her father is a pastor and former Marine, so leaving anyone behind is not in his DNA, but the situation is so dire, he’s going to send his daughters to stay with family in Florida, "he thinks that the right thing to do is stay in Puerto Rico and help rebuild but my family is going to be just kind of torn apart by this hurricane." she says.

Ortiz has a picture of when she visited the island in July of this year standing in front of a brick building with a Puerto Rican flag, her father sent her a picture of the same building. The entire front is a pile of bricks and the roof is ripped off.

She says as bad as it is, she knows with help Puerto Ricans will be okay, "Puerto Rico will rise again."

She says a lot of people don’t realize Puerto Ricans are American citizens and her father served our country, just like many on the island, "There’s a strong military presence there … everywhere you go you see young men in uniform," she says adding that now they feel abandoned.

To contribute to her fund click here: Food Drive For Puerto Rico