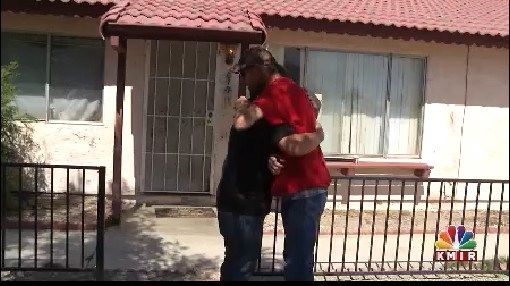 Two Desert Hot Springs men sprung into action after a suspected drunk driver crashed into a truck with three children inside. Seven people were transported to the hospital, and today, the family in the truck met with the heroes that helped pull them out.

“Finally, nice to meet you," is what Dane Starmer said to Dexter Brown when the spoke for the first time since the crash. The Desert Hot Springs community immediately began hailing them as heroes when word got out that they pulled those kids out of the pick-up truck.

This reunion came after 23 year old Brandon Byers lost control of his mini-van, while allegedly driving under the influence.

That’s when Dane sprung into action.

“I just wanted to make sure that everybody was okay and if they weren’t, that they knew that somebody was there to help them get through it."

Story: Cheerleaders Forced To Do The Splits

However, everything happened so fast so Dane didn’t catch name of the guy who helped him…until now.

Dexter Brown got to the crash site not too long after Dane arrived. Dexter immediately let everyone know that there was something terribly wrong with the truck.

“There was a heavy presence of fuel and gas pouring out of the bottom of the vehicles. That was a primary concern for us of igniting the fire from the hot engine of the vehicle.”

The father of the kids, Chris Cunningham couldn’t wait to meet the heroes that saved his kids.

“Thank you, you guys did awesome last night, I have never met you guys before and for you to come help my kids like that, it’s awesome.”

Turns out, a home surveillance camera actually caught part of the crash, that, as Chris told us, seemingly came out of nowhere.

“It just felt like my truck exploded. We didn’t see any lights and then my truck just went off.”

After Chris spoke to Dane and Dexter, the kids also got a chance to talk to their heroes.

Ali Cicogna thanked them for pulling them out, Kaylee Cunningham said that they were lifesavers, and Jayden Cunningham had something extra special to say to the two men that saved his life.

“I wanted to meet them to say thank you because if they did;t help us we might not have been at the hospital and we would’t be here right now.”