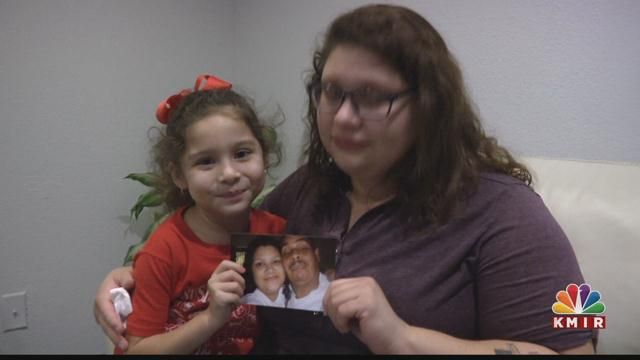 Imagine not being able to speak to a loved one who has been through a natural disaster. That’s what a woman from Palm Desert is going through. Her father and extended family are in Puerto Rico. And there’s thousands of people like her going through the same thing since Hurricane Maria slammed into the island. Two Coachella Valley men are trying to help connect families with solar technology.

Tency Fumero from Palm Desert is scared for her father Jose Fumero Rodriguez. He’s in Puerto Rico. Where the worst hurricane in nearly 100 years left the island on the brink. She hasn’t been able to speak with him since it hit.

She says she’s desperate to hear his voice, "It’s very frustrating because i just want to have a call from my father you know and I want my father here, Puerto Rico is in a bad situation right now," she says through a cracking voice on the verge of tears.

Tency says her father lives in a remote part of the island and just thinking about the her dad who’s a disabled Army veteran stranded without basic necessities has resulted in many sleepless nights, "You don’t know if he’s alive and if he’s alive does he has some place to sleep or has water, food, it’s still raining so you don’t know anything."

She says her mother died three years ago and she doesn’t want to lose him too, "This is the only person I have you know," adding the other person in her life is her daughter, little Jency.

Jency says she’s afraid too and like her mom she wants to bring her grandfather to live with them in the Coachella Valley, "I just want to my father, my grandpa to come here with me, I think he’s not okay because I think he’s in el huracan."

After watching the devastation in Puerto Rico on T.V. Jim Morales says he had to help so he reached out to the company who installed his solar panels, Hot Purple Energy a solar power company in Palm Springs. He told the president of the company Nate Otto about the idea of portable communications boxes to help people in Puerto Rico who are without power connect with worried loved ones. Otto and his team got to work immediately and built six portable solar powered wifi hot spots. The boxes are ready to go but they need help to pay for the cost to ship them and set them up and the satellite time. So they set up a GoFundMe account in hopes the Coachella Valley could help raise money for the local team to help.

When asked how it would feel if he could connect Tency with her dad with their technology Morales said, "Isn’t that worth a million dollars almost so the important thing is to make sure these things get there intact and they’re being used by the people of Puerto Rico to get messages out?"

Until then, Tency and her little girl will be holding Jose close to their hearts, "Te amo welo Jim (I love you grandpa Jim)," says little Jency.