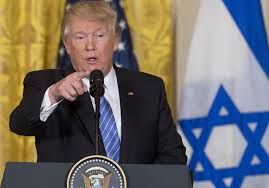 Around the world, the move is controversial. This embassy decision has reversed nearly seven decades of American foreign policy and with that comes mixed feelings and, already, protests in Gaza. We spoke to Rabbi Andrew Bentley from the Sinai Temple, here in Palm Desert, who helps shed light on feelings from both sides of the aisle.

“Jerusalem is the capital of Israel and that America has finally recognized that i think is a move in the right direction.”

These are thoughts that Rabbi Bentley had after President Donald Trump formally recognized Jerusalem as the capital of Israel.

President Trump said that the decision was:

"Nothing more or less than a recognition of reality, and it’s also the right thing to do.”

However, Rabbi Bentley says peace has not happened in the last 20 years, so he’s hopeful that this new approach is the right one.

Now, Rabbi Bentley says these new boundaries are making folks living in Israel and the U.S. a bit uneasy.

“People are fearful more that there is going to be a breakout of another violence, but there are other people in the Jewish community that believe that this affects the United States’ ability to be an honest broker in the process.”

Meanwhile, President Trump says the U.S. won’t interfere with negotiations between the Israelis and the Palestinians.

“We are not taking a position of any final status issues.”

As it stands, Rabbi Bentley says he is aware that violence may follow the decision but is hopeful that it will bring on real change.

President Trump promised to move the embassy during the 2016 Presidential Campaign…though the embassy staff will have to stay in Tel Aviv for an additional six months until there is a new facility for them in Jerusalem.