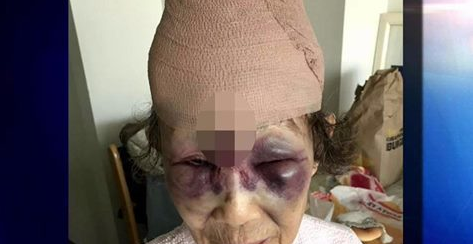 Authorities Monday sought public help to find a man who attacked an 85-year-old woman in Koreatown, leaving her with severe facial injuries.

"Her eyes are really swollen so she can’t open them," said Yujin Ko, the victim’s granddaughter. "She was pretty alert, and she says she remembers everything…she was able to go home so we’re really lucky that she didn’t suffer anything more serious."

Surveillance video shows the victim walking by and then two to three minutes later, a small commotion is visible before a man is seen running in the opposite direction.

Ko said her grandmother was walking to the market on Olympic Boulevard.

"She said a man was coming towards her, and he just hit her. Basically struck her really hard and from there she just fell back," Ko said.

The suspect was described only as Hispanic and in his mid-30s, according to the LAPD.

"Her eyes are black and blue, her forehead is black and blue. She got a lot of stitches on her scalp, so she’s bandaged up," Ko said.

The suspect hit her for no apparent reason, Ko said.

"Luckily, a lot of people were there to help her, and so she said people were rushing to her, and I don’t know if that’s the time that guy got away," Ko added. "The paramedics came, the ambulance came, and the police came."

Detectives were looking for security images that could help solve the crime. Anyone with information on the case was urged to call the LAPD Olympic Division at (213) 382-9045