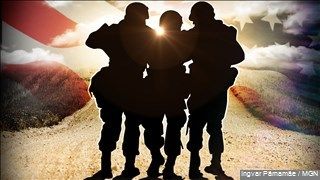 Veterans exposed to open air burn pits in Iraq and Afghanistan know full well the health effects that come along with inhaling the potentially deadly fumes. At this years Veterans University event, a special focus will be placed on what veterans are now calling the new Agent Orange.

Agent Orange led to a myriad of health issues among American soldiers in Vietnam. It is capable of damaging genes, resulting in deformities among the offspring of exposed victims. People like Vietnam veteran Ronald Heath.

"My first wife had a miscarriage half the brain was missing from the baby. They asked to have it aborted, thank God, God took the baby…and I’ve had some other things taken out of my body that should have never been in my body," said Heath.

Today a similar wartime practice is affecting veterans all over the country. They’re called burn pits. In Iraq and Afghanistan, burning waste was the easiest way to get rid of it, but inhaling the toxic fumes can be deadly.

Story: Veteran Speaks Of Benefit Challenges Ahead Of University Event

The VA maintains that there is no evidence of long term health problems from exposure to burn pits. But veterans say otherwise. Many are coming home to be diagnosed with several types of cancer and many more are not sure how to go about getting help. This years Veterans University event, which for the third year aims at informing veterans of the various benefits and compensation available to them, will shine a light on a subject the VA often whispers about.

"We want any veteran who has been exposed in Iraq and Afghanistan to those big burn pits where the military burned all their garbage to come and learn about he burn pits, learn about their health effects, learn about what they can do now to start protecting them and their family and their health," said Congressman Raul Ruiz (D) 36th District.

The Veterans University event, which was created by Congressman Ruiz, will take place on March 3rd at the Agua Caliente Casino Resort Spa in Rancho Mirage.