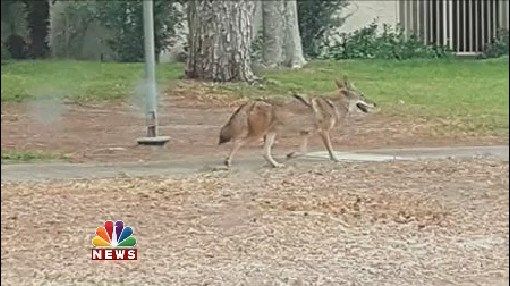 You may want to keep a close eye on your small pets as desert coyotes are wrapping up their mating season and that could spell trouble for your cats and dogs.

The mating season for the coyote population in the desert is almost over. It started in January and is typically over by early to mid-March. Coyotes who mated early in the season may already have a litter of pups and that could mean trouble for people with small pets.

"They are howling. You can hear them do an assault on an animal because you hear the horrible sounds. And then it’s quiet," said Palm Springs resident Linda D’Alessio.

"At night and in the early morning we hear coyotes howling. They are usually in packs," said Palm Desert resident Julia Dugan.

Now that the coyote breeding season is almost over you could hear their howling more often. While coyotes are most active at dawn and dusk, that typically changes in the weeks and months after their pups are born. According to wildlife experts at The Living Desert, coyotes will hunt for food night and day to keep their young pups fed. They are also more aggressive and territorial.

Story: Abandoned Coyote Pup Is Now At The Living Desert

"It does concern me because I have little dogs as you can see. When we’re out walking them by the desert areas, of course it’s a concern," said Cathedral City resident Ramon Rodriguez.

Experts say coyotes are extremely intelligent hunters. Some have been known to stakeout a doggy door and wait for a dog or cat to emerge.

"We were walking. We always did a 9 o’clock walk at night. And two coyotes circled her. They came in different directions," said pet owner Donna Thomson.

"It was at night and they actually came around and flanked me. So there were some behind me and you could see some forward of me," said Dugan.

Experts say do not under any circumstances feed a coyote. Keep your cats and small dogs inside overnight and do not leave pet food outside.