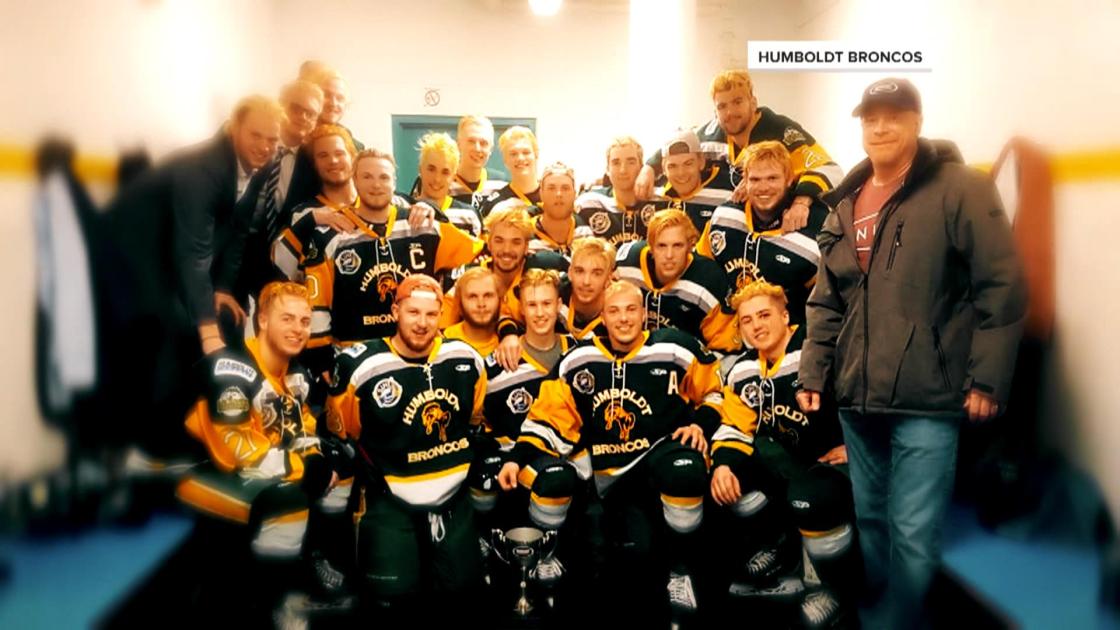 A small town in Canada’s Saskatchewan province mourned Saturday after a bus carrying a junior hockey team collided with a tractor-trailer, leaving 15 people dead and at least 14 injured.

“This is a dark moment for our city, our community, our province,” Humboldt Mayor Rob Muench said Saturday afternoon at a news conference. “There is no playbook on what to do in cases like this.”

Members of the Humboldt Broncos hockey team were headed to the town of Nipawin for a playoff game Friday night when the crash happened north of Tisdale, the Royal Canadian Mounted Police said.

Three of the 14 injured people were in critical condition, the RCMP said. Authorities have not identified the victims and would not confirm whether they were players or coaches. Twenty-nine people were on the bus.

The RCMP previously reported 28 people were on the bus, with 14 injured.

Expressions of support poured in, much of it focused on a Twitter photo that showed three injured players grasping each other’s hands while lying on hospital beds.

Speaking at the news conference, RCMP Assistant Commissioner Curtis Zablocki said the wreck occurred around 5 p.m. Friday when the tractor-trailer, traveling west on Highway 335, collided with the bus traveling north on Highway 35.

The driver, who was the lone occupant of the tractor-trailer, was not injured in the collision, Zablocki said. He was detained initially but is not currently in custody and his case is not currently being investigated as a criminal investigation.

“Our investigators will be looking at all aspects of this accident to determine what took place,” he said. “It’s too early to comment on the cause of the collision.”

The Humboldt team was scheduled to play the Nipawin Hawks in the fifth game of a best-of-seven semifinal playoff series Friday. The teams played a lengthy game Wednesday that Nipawin won 6-5 in three overtimes in Humboldt, leaving Nipawin with a 3-1 series lead.

The tragedy was felt across Canada, where hockey is the dominant sport and making long bus rides to tournaments is a rite of passage for young players.

Cam Talbot, goalie for the Edmonton Oilers in the National Hockey League, tweeted: “After all the hours spent on a bus with the boys over the years this one really hits home. Our thoughts and prayers go out to the families and communities affected by this horrible tragedy. #PrayersForHumboldt”

“I think everybody can relate to this experience,” said Muench, the mayor. “Throughout Canada we see teens going out into the Canadian winters on buses all the time.

“And it’s always a thought in parents’ and fans’ minds about what could happen, and unfortunately it has happened in Humboldt.”

Humboldt, a town of about 6,000, has a long tradition of fielding teams in the Saskatchewan Junior Hockey League.

The Broncos, like other teams in the league, attract players from different parts of Canada who stay with host families during the hockey season, the team’s website said.

Humboldt players range in age from 16 to 21, according to an online team roster. Thirteen of the 24 players listed on the roster come from Saskatchewan, with two from Humboldt. Most of the others list their hometowns as being in the province of Alberta.

“Our thoughts and prayers are extended to the families of our staff and athletes as well as to all who have been impacted by this horrible tragedy,” Kevin Garinger, the team’s president, said in a statement. “Our Broncos family is in shock as we try to come to grips with our incredible loss.”

In Humboldt, people showed up at the Elgar Petersen Arena to offer support, according to CNN partner CBC. Daigon Elny, a member of last year’s team, told CBC, “We were a family. You come to the rink … what’s better than that?

A gathering place also was established for families at Nipawin Apostolic Church so they can find out information on their loved ones, according to the Royal Canadian Mounted Police.

Expressions of sympathy poured in from around the globe.

The mayor said he talked on the phone with Canadian Prime Minister Justin Trudeau, who passed along condolences from world leaders. Trudeau also expressed his condolences on Twitter to the victims of the crash.

“I cannot imagine what these parents are going through, and my heart goes out to everyone affected by this terrible tragedy, in the Humboldt community and beyond,” Trudeau tweeted.

US President Donald Trump tweeted: “Just spoke to @JustinTrudeau to pay my highest respect and condolences to the families of the terrible Humboldt Team tragedy. May God be with them all!”

“We send condolence, comfort and strength to all affected by the devastating crash involving the Humboldt Broncos’ team bus,” the National Hockey League said on Twitter.

“I can’t imagine being the parent or the wife or the kids at home going through something like this,” Toronto Maple Leafs coach Mike Babcock said at a press conference. “It hurts.”

Friday’s crash is not the first highway accident to kill hockey players in Saskatchewan.

Four members of the Swift Current Broncos of the Western Hockey League died in a 1986 crash in the western province, CBC reported. A memorial to those players was erected at the crash site in 2016.

At the news conference, Garinger noted that the loss of life will be felt across Canada — and by the players’ host families as well.

Muench said it will take a long time for Humboldt to recover.

“We’re a small town and we’re overwhelmed with the outpouring of condolences we’ve received,” he said. “We’re asking for everyone’s support and consideration in the coming days and weeks and months and years it will take us to get through this.”​

CLICK HERE to visit the GoFundMe Page for the families of the team members affected.