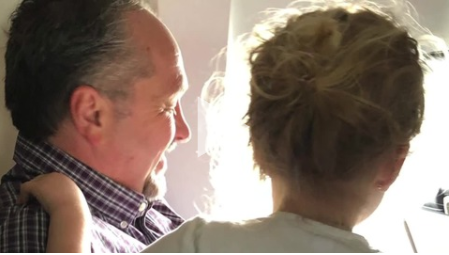 Kansas City, MO (WDAF) — A Lenexa, Kan. man is being applauded for his act of kindness on a flight out of Kansas City.

He helped a mom flying on her own with two little ones, and things started to get out of hand until he came to the rescue. She posted the story online which has already garnered thousands of likes and shares.

Traveling with little ones can be a lot to manage, but when you have a little help, it can make all the difference.

That’s what Jessica Rudeen learned from a stranger who is now a friend.

Rudeen plans ahead when she travels, but parent who have been in her same situation know, sometimes you just hit a snag.

“The baby was hungry. He’d been up since 4:30 a.m. My daughter lost her nerve and started screaming ‘I want to get off the plane! I want to go!’ Rudeen said.

Her seatmate was Todd Walker from Lenexa who makes this trip a lot for work.

“I saw was a mom looking around the corner at me with big eyes, and two kids in tow that were both having a bad day. They were both screaming,” Walker said.

Instead of changing his seat he decided to help.

“When he reached for Alexander, it was just a huge feeling of relief,” Rudeen said.

“I reached over, and she handed me her baby, and she was a able to get Caroline strapped in, and I handed the baby back and she was able to give him a bottle and start feeding him a little bit,” Walker said.

That’s when he made a new best friend.

“Within a couple minutes, they were fine. Before we even had taken off, and before we landed I’d been coloring with Caroline, and looking out the window, and seeing different things,” Walker said.

“It was a huge blessing to be able to accept that help, and to even be offered that help,” Rudeen said.

Before they landed, Walker and Rudeen realized they were headed to the same connecting flight.

“I wasn’t expecting him to hang around after the first flight, but helped us off the plane, he helped us open up the stroller, get the car seat in the stroller, and then he kinda just took the lead, and led us to the next gate,” Rudeen said.

“We got there, and I changed my seats and sat with them, and made a new friend,” Walker said.

“I could have been placed next to anybody, but the fact that I was placed next to someone with someone who was so selfless, and giving, and generous with his time. I have no words for it really,” Rudeen said.

They are hoping to meet up again, and Rudeen whishes it were sooner rather than later.

“I do kind of want to ask Todd if he’ll fly back to Wilmington, so he can fly back with us. I’m a little nervous about who I’m going to end up on the plane with next,” Rudeen said.

“When’s your next flight?” Walker said.

Walker says what he did wasn’t that big of a deal, and he’s just glad Rudeen accepted his help.

His wife went through a similar situation when his kids were young, and he never forgot it.

Walker says helping someone is easier than you think.

“If you think you can, or if they certainly ask you for it step up and help them. You know, it doesn’t cost you anything to step up and give them a hand,” Walker said.

“His kindness made such a huge impact on my life, and it’s making an impact on other people’s lives too,” Rudeen said.

She posted about the trip on Facebook trying to find him to say thank you.

The viral post has lots of moms posting that they can relate. They say Walker acted with compassion and really paid it forward.