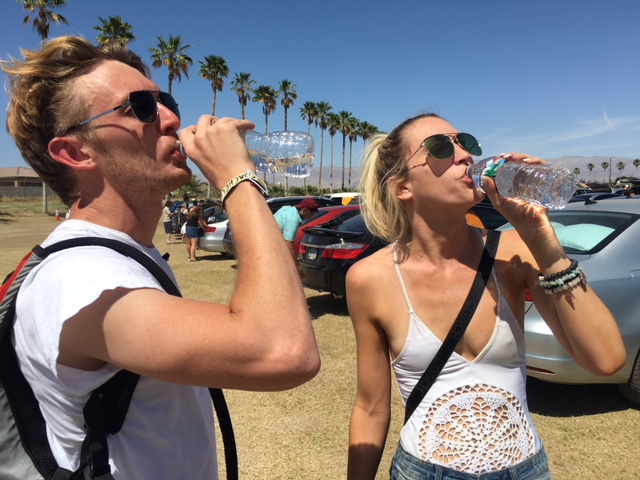 The final day of Coachella 2018 brought with it triple digit heat, but that’s not stopping music lovers  from closing out the festival with a bang.

“We got our sunscreen and stuff. We’ve got our vitamin water so we’re good to go,” said Gerard O’Donoghue of Ireland.

The final day of the festival saw temperatures rise above 100 degrees. Several grocery stores around the festival grounds were bustling with “Coachella heads” stocking up on water and Gatorade. But to many music lovers, the heat is half the fun.

“That’s part of the experience. I’m not the only one who is hot. There’s like millions of other people who are hot too. And we’re all just trying to have a good time and trying to be safe,” said Adal Jamil.

For those who are concerned about the high temperatures, festival veterans say there are plenty of water stations along with a few shade structures. Of course, where you come from has a lot do with how you are able to cope.

“I’m from Ireland, we’re not used to this heat at all so, yeah, it’s going to be tough out there but we’re looking forward to it,” said O’Donoghue.

“I’m from Trinidad, I feed off the heat. I like to sweat so it’s good,” said festival goer Allix Devenish.

“It was snowing in Denver and now it’s a hundred degrees and I’m melting so, yeah. It’s tough,” said festival goer Gabby Hawkins.

But when it comes down to it, for many patrons the Coachella vibe is simply too good to pass up. Eminen is expected to close out the Festival. He has promised a mix of older and newer music. Festival goers can also expect to see some guest appearances make their way to the stage with Slim Shady.

“There is a really positive energy that you feel as soon as you walk in. It’s Awesome,” said Devenish.