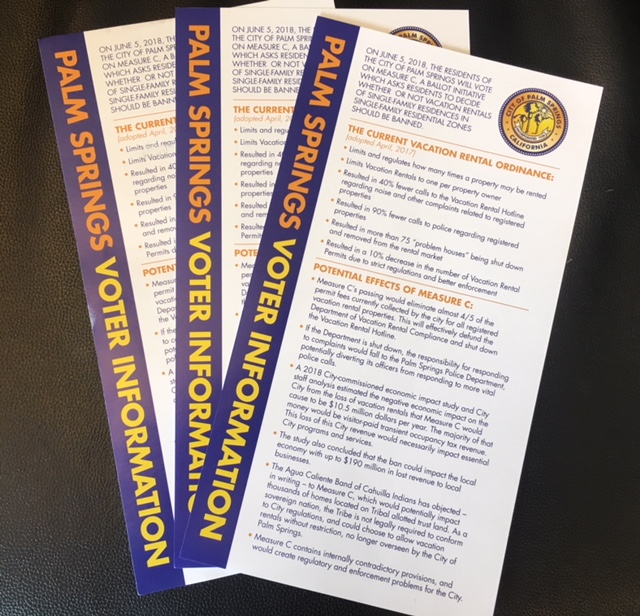 The battle over vacation rentals in Palm Springs was heated even before this past weekend, but what happened on Saturday has some supporters of the proposed ban downright furious.

A flyer paid for by the city of Palm Springs, arrived in voters’ mailboxes and some claim the city is using taxpayer money to unfairly sway the upcoming vote.

“It’s biased, it’s one sided, and it’s filled with have truths. It was pad for by the city’s taxpayer money and it’s completely one-sided which shouldn’t be done by the city,” said Robert Grimm, a member of the Palm Springs Neighbors For Neighborhoods group.

“We don’t take the side of either one. All we do is just very factual. This is what the current ordinance does, if it goes away, this is what it will do. So we’re not taking a side either way,” said Palm Springs City Manager David Ready.

The neighborhood group says the city is taking sides and was very selective in what it included in the flyer. For example, the flyer says there are limits on vacation rentals to one per property owner. But it fails to mention some vacation rental owners are in possession of up to ten homes protected by a grandfather clause in the ordinance.

“The city is supposed to be teaching the residents and giving them information that they can make a well educated decision on how to vote on this. The city is not doing that. They are giving one side and they are only giving little pieces,” said Grimm.

The flier also touts a 10 percent reduction in the number of vacation rental permits due to strict enforcement. But the neighborhood group doesn’t think it’s the enforcement that’s keeping people from applying.

“What investor in their right mind would buy a home and make it an STR right now with that ballot vote coming up and two lawsuits against it being held. So they’re telling little bits, but they are not telling the whole story,” said Grimm.

“We certainly can not take a position. It’s just information. And I would note one important thing, the city attorney approves everything that leaves city hall with regard to an educational campaign,” said Ready.

“They’re telling little bits but they’re not telling the whole story. And their job is to give the story on both sides so people can give an educated opinion,” said Grimm.