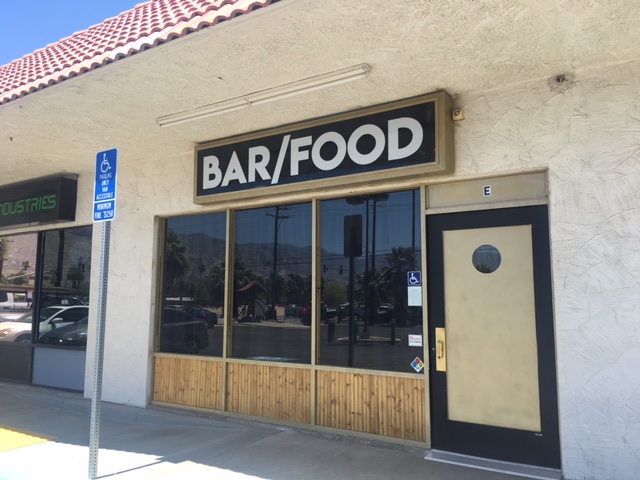 Sossa’s Plaza on Gene Autry and Vista Chino in Palm Springs isn’t much to look at. When you drive by it, it’s easy to ignore. There’s a meat market, a cell phone/smoke shop and a mattress store advertising…dollar sodas and water? Yeah, this place is easy to overlook. But if you look closely, you’ll find in the middle of this step child of a strip mall a sign that reads “Bar Food.” Some people were curious enough to go inside.

“When you drive by you just wouldn’t expect it to be here. So it’s a surprise as well as a secret surprise,” said bar patron Allyn Miller.

The space had been empty for six years, but when owner Paul O’Halloran saw it for the first time, he knew this was the spot.

“As soon as I walked in the door I knew what this place was going to look like when I was done with it,” O’Halloran said.

So he refinished the vintage mahogany bar, polished the ancient mirrors, and this longtime host who had worked with the likes of Bobby Flay and Anthony Bourdain finally has a place of his own.

“It’s one of those down the alley, to the left, knock on the door,” said O’Halloran.

On the first day it opened, there was no grand opening or announcement on Facebook.

“My favorite compliment is when people walk in here through this strip mall and say ‘Oh my God you’d never know this place is in here,” O’Halloran said.

Some call it a Speakeasy. It’s dark, the owner wears a bow tie, and of course, the location is everything.

“When you’re outside you don’t really expect to walk into a place like this that looks really nice,” said bar patron David Salinas.

“I’m trying to transport people back to a time when everyone just hung out and listened to music and socialized and had good food. I’m trying to recreate a neighborhood bar,” said O’Halloran.

When you’re at the bar, Paul wants you to have a couple.

“Nothing so precious where it’s like an after dinner drink, but like a drink. A Manhattan, a Margarita, a Cosmopolitan. The classics pretty much,” O’Halloran said.

Then there’s the food.

“Something for everybody but not one of these ten page menus where it’s all mediocre. Just do ten things and do them really well,” said O’Halloran.

“It’s just a hidden little gem that you can always find a good drink and a good atmosphere,”said bar patron Chad Miller.