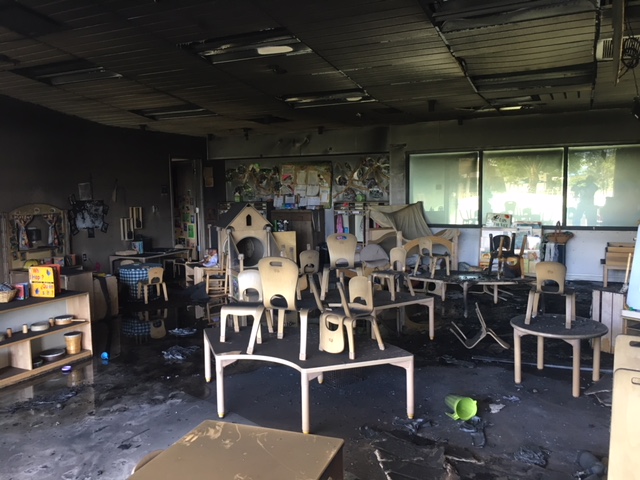 About 30 toddlers were displaced Wednesday after a fire broke out at the Early Childhood Education Center at College of the Desert Tuesday night.

A smoky, Charcoal colored mess. That’s what was left after a fire burned through a toddler classroom. For student-parent Kyle Torres and his wife whose two daughters attend the facility, it was a rough day.

“My wife received a call at about 6 am this morning letting us know that the school was going to be closed. We weren’t given the details as to why,” said Torres.

Like Torres, many parents whose children attend the education center at COD have busy schedules and not having child care could be a huge burden to overcome.

“Babysitters, it’s expensive. Even for one alone. Depending on where you’re at and who you’re looking for, it’s between $500 and $1000 dollars per child. And we have two.”

“For us personally, I work full time, I’m a student part-time, my wife works full-time, she is a student full-time so stacked schedule. So this is really crucial. It plays a big role in helping out with out daughters while we do that,” said Torres.

When they heard about the fire, parents began scrambling to find a solution. Not always easy when you work, go to school and a have a family to think about.

“Babysitters, it’s expensive. Even for one alone. Depending on where you’re at and who you’re looking for, it’s between $500 and $1000 dollars per child. And we have two,” Torres said.

And the timing couldn’t be worse as student-parents study for upcoming finals week. They say a fire was the last thing they needed before heading in to take their final exams.

The good news for all the student-parents at COD? After a meeting late Wednesday afternoon, college officials informed parents that their child care services would not be interrupted. The college plans on housing the toddlers in a part of the education center that was not damaged or affected by the fire in any way. Parents are now breathing a huge sigh of relief as they head into finals weeks. Certainly they have plenty to worry about with passing their classes.