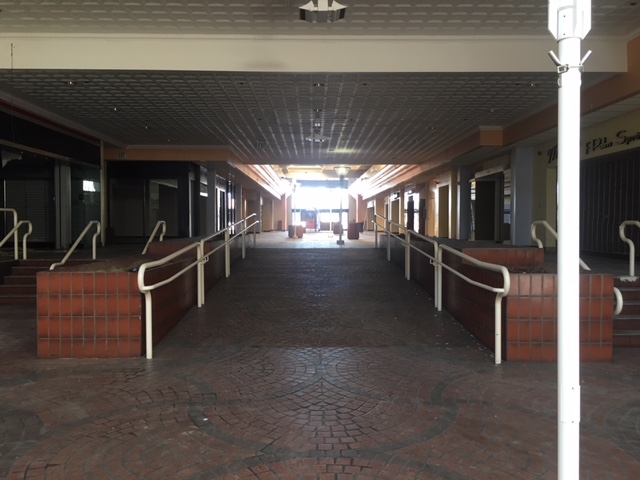 Around the year 2021, College of the Desert will plant its fifth flag, fulfilling a commitment to bring higher education to the west side of the Coachella Valley. KMIR got an exclusive look at the future sight of COD’s master plan, the Palm Springs Mall.

It’s been called an eye sore, a waste of space, and a relic of the past. In that time, no one has been allowed inside, until now. College of the Desert President Dr. Joel Kinnamon was the first after someone handed him a pair of keys.

“I thought, ‘oh wow, I have a key.’ I didn’t come in that day. But about three days later on a Saturday when I wasn’t in presidential attire, I thought I’m going to go check this out. It’s like Christmas, there a box under the tree and I want to see what’s in it. And so I did. I came in and I was like ‘wow, it’s a little surreal that we’re here and we’re seeing us move on to the next step,” Kinnamon said.

After a years long battle with the property owner over the price tag, C.O.D. paid $22 million to seal the deal, which was $13 million dollars more than they originally offered. Why? As with almost all real estate purchases, location is everything.

The new campus will house programs like digital media, healthcare, and sustainable technologies. But in the Coachella Valley, where the economy is fueled by tourism, Kinnamon says C.O.D. will help supply the industry with a qualified workforce, offering hospitality and culinary arts programs that don’t simulate the real thing, they are the real thing.

“You may say, ‘wow this is interesting. There is an area that has a restaurant that we might want to go eat at.’ Then you’re going to find out the food is being prepared by students in the culinary program. ‘There is a hotel I may stay in,’ you’re going to find out the people at the front desk and the people that are working in this hotel are students that are being prepared for the industry,” Kinnamon said.

So what will become of the former Palm Springs Mall? The place where people window shopped at Gottschalks and ate ice cream in the food court. Will the mall stay up and be retrofitted to accommodate thousands of students, or will it come down, giving C.O.D. a fresh canvas to work with?

That question will be answered when Kinnamon receives a final report on the integrity of the building, but indications point to a complete overhaul.

“It typically is a high bar for a facility that is not designed for public education to meet the requirements of the state,” said Kinnamon.