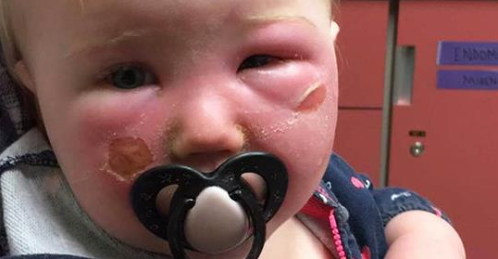 Rebecca Cannon thought she did everything right before her then 14-month-old daughter, Kyla, went out to play on an overcast day in early May, 2017. Cannon, 32, was visiting her sister in Newfoundland, Canada, and had forgotten their usual sunscreen, so borrowed some.

She sprayed the Banana Boat Kids Sunscreen Spray SPF 50 on her hands and gently rubbed it on Kyla’s nose and cheeks.

“When it came to having sunscreen on, I thought it was better to have some sunscreen than none at all,” Cannon told TODAY.

In a short time, the little girl’s face became red and swollen. The next morning, it was worse.

“She was red. She was blistering,” Cannon said.

Cannon, who lives in Botwood, Newfoundland, Canada, took Kyla to the emergency room where doctors diagnosed her with a second degree burn. But Cannon couldn’t figure out how Kyla received the burn. On top of having the sunscreen, Kyla wore a hat and was covered for much of the day. Plus, the sun didn’t seem to cause burns on anyone, including Cannon, who wasn’t wearing sunscreen. The doctors prescribed a cream, but after two applications, Kyla’s face was redder and more swollen. They returned to the ER and Kyla was then sent to a dermatologist, who diagnosed her with a “caustic burn from something in the sunscreen.”

Cannon talked to Banana Boat; the company offered a refund and said it would test the sunscreen to determine the cause of the reaction. She never heard from Banana Boat again but Health Canada (a federal institution helping Canadians maintain and improve their health) has an open investigation into the sunscreen because it received complaints about similar burns.

“All Banana Boat products undergo rigorous testing to ensure they are appropriately labeled and meet all relevant health regulations, including SPF tests. All Banana Boat sunscreens also fall within a neutral PH range, which means they are safe for human skin, topical use, and cannot cause chemical burns, which are sometimes mistakenly linked to personal care products or confused with sunburns, or tissue damage.”

Dr. Adam Friedman — who did not treat Kyla — said that irritant contact dermatitis, what likely happened to Kyla, commonly occurs when an irritating substance touches a person’s skin. Something like an alcohol or even vitamin C, both ingredients found in sunscreens, could cause it.

“It could simply be an irritant reaction rather than something unique to this product,” he said. While the Banana Boat label says the product is safe for children six months and older, Friedman recommends that children use mineral block sunscreens — zinc oxide or titanium dioxide — until they’re about 4 or 5 years old.

“There are specific sunscreens for different ages because there are unique biological differences at different ages,” Friedman said. “Infant skin is much more irritable.” Cannon did the absolute correct thing by rubbing the spray sunscreen into Kyla’s skin, Friedman said. Many people forget that. And, she used clothing to cover Kyla, which adds extra protection.

A year later, Kyla has no scars on her face from the burn. Still, her mom has a warning for other parents:

“I never thought in a million years that this would happen,” she told TODAY in a recent interview. “I just want people to do their due diligence when they are putting stuff on their youngsters.”