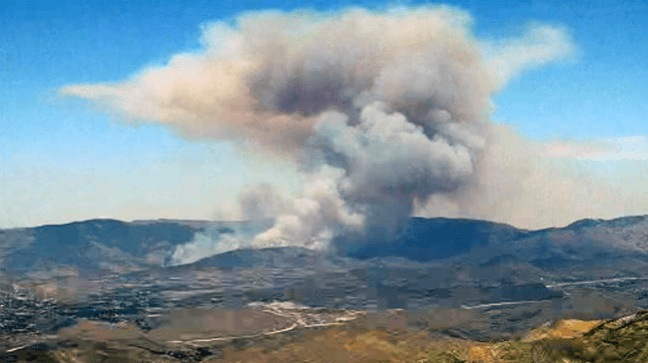 Evacuations were ordered Monday as the Stone Fire scorched land near Agua Dulce.

It’s unclear how many people are affected. Animal control officials are also being dispatched to the area to assist with evacuations of horses and other animals in the rural area.

The fire broke out early Monday afternoon and quickly scorched 1,000 acres of brush and threatened structures, according to county fire officials.

Dubbed the “Stone Fire,” the blaze was reported around 12:30 p.m. Monday near the 35100 block of Anthony Road and went to a third alarm by 1 p.m., according to the Los Angeles County Fire Department.

The fire has forced closures on Wallace Canyon, Agua Dulce Canyon and Anthony roads north of Sierra Highway. The fire has scorched about 1,000 acres, but no injuries have been reported. About 350 firefighters are battling the blaze, authorities say.

About 240 personnel were on scene, and a fixed-wing aircraft was deployed. The flames were burning in medium brush.

Nearby Acton was reporting 96 degrees with relative humidity of 11 percent and west winds gusting at 17 mph during the noon hour.

More than 1,600 wildfires have been reported so far this year in California, burning about 9,400 acres, according to Cal Fire.

At this point last year, more than 1,400 fires burned 23,700 during one of the state’s worst years for deadly and destructive fires.

The five-year average during that same time frame for California is nearly 2,000 fires and 14,000 burned acres.