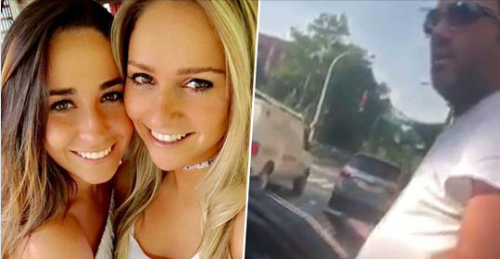 New York City has suspended the license of an Uber driver who booted two women after they kissed in his car.

A Taxi and Limousine Commission spokesman calls the driver’s behavior “ridiculous.” Allan Fromberg says it’s 2018 and “this isn’t the way we live any more.”

It comes after Alex Iovine and Emma Pichl — both in their 20s — said they were kicked out of the car after exchaning a “peck” on the lips during a trip from Gowanus, Brooklyn, to Manhattan’s East Village.

“We peck kissed, like I reached across and pecked kissed her,” said Iovine. “That’s how fast it was that’s why I say ‘pecked.’”

Iovine recorded what became a tense standoff with their driver as he tells them kissing is “illegal.”

The two women retort, “Kissing is not illegal.”

The driver then replies, “You can’t do this in the car. You aren’t allowed to do this.” He goes on to say, “It’s disrespectful.”

Iovine and Pichl can then be heard getting upset and threaten to report the driver to both the police and Uber before the video ends.

“It turned into anger, which we are not proud of,” Iovine said. “We were just so overcome with emotions.”

Pichl added, “I’d say if he feels so uncomfortable with two girls pecking in the backseat then he shouldn’t be an Uber driver in New York City.”

The pair did report the driver to Uber afterward, and the company has launched an investigation and “will take the appropriate action.”

“Uber does not tolerate any form of discrimination,” the company said in a statement.