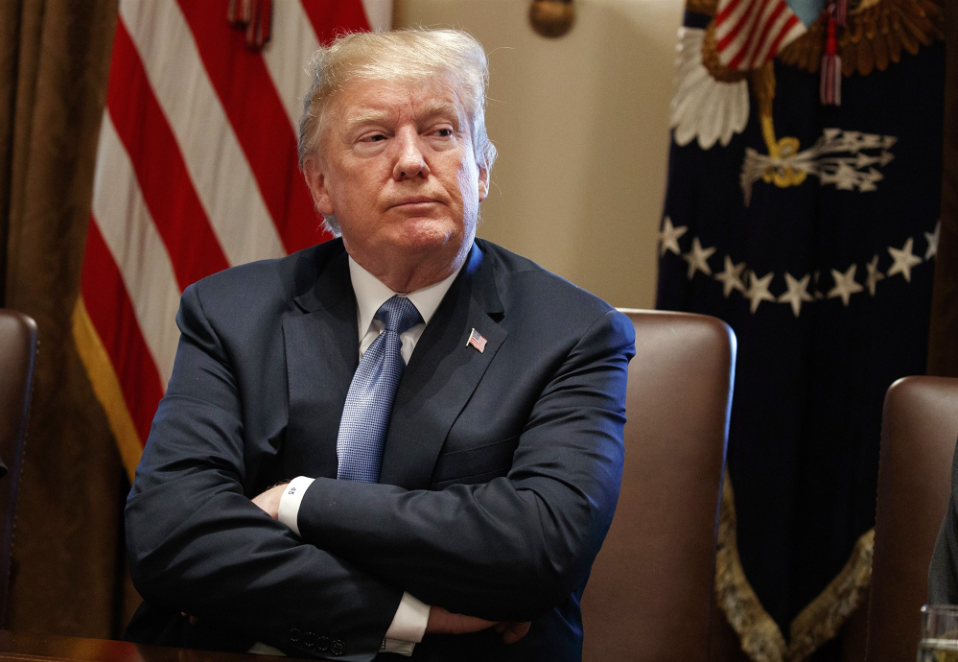 In reversal, Trump calls on lawmakers to stall immigration action until after midterms

After repeatedly saying Congress needs to solve the immigration problem, President Donald Trump on Friday called on lawmakers to delay dealing with the critical issue until after the midterm elections — while accusing Democrats of concocting politically motivated “phony stories of sadness and grief” on the border.

We must maintain a Strong Southern Border. We cannot allow our Country to be overrun by illegal immigrants as the Democrats tell their phony stories of sadness and grief, hoping it will help them in the elections. Obama and others had the same pictures, and did nothing about it!

“Republicans should stop wasting their time on Immigration until after we elect more Senators and Congressmen/women in November,” Trump tweeted. “Dems are just playing games, have no intention of doing anything to solves this decades old problem. We can pass great legislation after the Red Wave!”

Republicans should stop wasting their time on Immigration until after we elect more Senators and Congressmen/women in November. Dems are just playing games, have no intention of doing anything to solves this decades old problem. We can pass great legislation after the Red Wave!

Elect more Republicans in November and we will pass the finest, fairest and most comprehensive Immigration Bills anywhere in the world. Right now we have the dumbest and the worst. Dems are doing nothing but Obstructing. Remember their motto, RESIST! Ours is PRODUCE!

Even if we get 100% Republican votes in the Senate, we need 10 Democrat votes to get a much needed Immigration Bill – & the Dems are Obstructionists who won’t give votes for political reasons & because they don’t care about Crime coming from Border! So we need to elect more R’s!

The tweets come as lawmakers are continuing to try to find a way forward on immigration. The House announced Thursday that it had postponed a vote on a moderate compromise immigration bill until next week. Another immigration measure, supported by conservatives, was defeated in a floor vote Thursday.

The call for a delay is yet another stunning about-face for Trump, who earlier this week had tweeted, “Now is the best opportunity ever for Congress to change the ridiculous and obsolete laws on immigration.”

#CHANGETHELAWS Now is the best opportunity ever for Congress to change the ridiculous and obsolete laws on immigration. Get it done, always keeping in mind that we must have strong border security.

House Majority Leader Kevin McCarthy, R-Calif., told NBC News that the House will still vote on the GOP compromise immigration bill next week, despite Trump’s tweets calling for a delay.

“I think we are doing quite well on the bill because the conference together is working on it,” McCarthy said Tuesday. “I think it’s important that the House be able to show that we can take the action.”

Asked if the tweet was damaging, McCarthy spun back on Democrats, saying, “For the Democrats it’s very damaging. They show that they’re not serious about solving this issue. There’s an opportunity and a willingness on our part and they’re nowhere to work on it.”

House Majority Whip Steve Scalise, R-La., also said Friday that the House will still vote next week on the compromise immigration bill. He did acknowledge that passing the compromise bill will continue to be an “uphill battle.”

Rep. Carlos Curbelo, R-Fla., a moderate Republican who led the charge on the immigration discharge petition, dismissed the impact of the president’s tweet Friday.

“We’re going to keep working. There are a lot of members dedicated to making this happen,” Curbelo told NBC News. “We had major breakthroughs yesterday. A lot of members are excited about getting something done on immigration so we’re going to continue working. We have another meeting later today.”

Curbelo said he’s not disappointed by the president’s tweet because Trump “changes his mind often so I’m confident that if we get a good product out, that he’ll get behind it.”

Rep. Leonard Lance, R-N.J., another moderate, said on MSNBC’s “Morning Joe” that the Congress should continue working on immigration legislation.

“I respectfully disagree,” Lance said, reacting to Trump’s tweet. “I think we should continue to work on it.”

“It doesn’t help, I’ll be honest,” Rep. Joe Barton, R-Texas, told reporters reacting to Trump’s tweet. “What we wanted was for the president to say vote ‘yes’ next week on the compromise bill. To be fair to the president, he’s being realistic. You’ve got to have 60 votes in the senate so that is a pretty tough bar to meet.”

“It’s just…you just fear that tweet in the morning, saying, ‘Oh no, how many policies are you going to do by the day’s end?'” she told reporters. “How many times will he change his mind?”

After GOP leaders decided Thursday to delay the vote on the compromise immigration bill, during a two-hour House GOP conference Thursday evening, members discussed potentially adding E-verify and agricultural visa work provisions into the compromise bill. The addition of these provision could tilt the bill slightly more conservative and will likely garner more votes across the caucus as a result.

However, members from across the ideological spectrum said they would hash out a compromise on these two issues, which is why they decided to delay the vote until next week.

Multiple leaders leaving the meeting also expressed confidence that the two new additions could get the 218-vote majority necessary to finally pass an immigration bill and send it over to the Senate, with some predicting the president might like this bill even more than the conservative measure the House voted down on Thursday.

The president’s message on Friday came at the end of a tumultuous week that saw public outcry over his administration’s policy of separating migrant children from their parents at the border culminate with an executive order from Trump halting the practice, and fruitless toil in the House to pass an immigration bill.