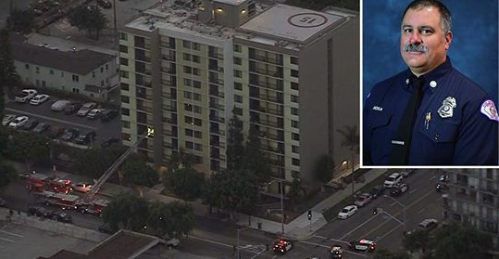 A capital murder charge was filed Wednesday in the shooting death of a 17-year veteran of the Long Beach Fire Department who was struck by gunfire as he responded to an explosion and fire at a high-rise senior home.

Seventy-seven-year-old Thomas Kim, a resident at the complex, was charged with murder, two counts of attempted murder a one count each of arson of an inhabited structure and explosion with intent to murder. He also faces a special circumstance allegation that the murder was committed while a firefighter was on duty and the special allegation that he personally and intentionally discharged a handgun that caused great bodily injury and death.

It was not immediately clear when he will make his first court appearance. NBC4 is attempting to determine whether he has an attorney.

Kim is accused of killing 45-year-old Capt. David Rosa on Monday morning as the veteran firefighter was responding to a report of an explosion and fire at the building in the 600 block of Eat 4th Street. Firefighters knocked down the fire at about 4 a.m. and reported a strong smell of gasoline coming from a unit in the high-rise building.

About eight minutes later, police received a report of shots fired from the residence.

The residential tower near downtown Long Beach has 100 apartments for low-income people age 62 and older as well as disabled adults over age 18, according to its website.

A handgun was recovered at the scene. Bomb squad technicians removed flammable liquids believed to be gasoline from the apartment, police said.

As for a possible motive, police said in a statement Wednesday that a preliminary investigation indicates the fire was not set to draw first responders to the senior home to ambush them. It likely stemmed from a dispute between the suspect and a neighbor, police said, adding that a note found at the scene suggests the suspect was attempting to carry out a murder-suicide.

Colleagues and Long Beach residents lined streets along a procession Monday afternoon that transported Capt. Rosa’s remains in a flag-draped casket to the coroner’s office in downtown Los Angeles. Some stood in salute on top of a fire truck on a freeway overpass.

Rosa is survived by his wife and two children.

“It hits home. We just show up to do our job,” said Long Beach Police Sgt. Brad Johnson said Monday after the shooting. “Firefighters, they deal with fire. They don’t deal with bullets. It’s a sad day in Long Beach’s history.”

A second firefighter who suffered non-life-threatening injuries was released from a hospital late Monday morning. He was identified as 35-year-old Ernesto Torres, also part of Long Beach Fire Station No. 10.