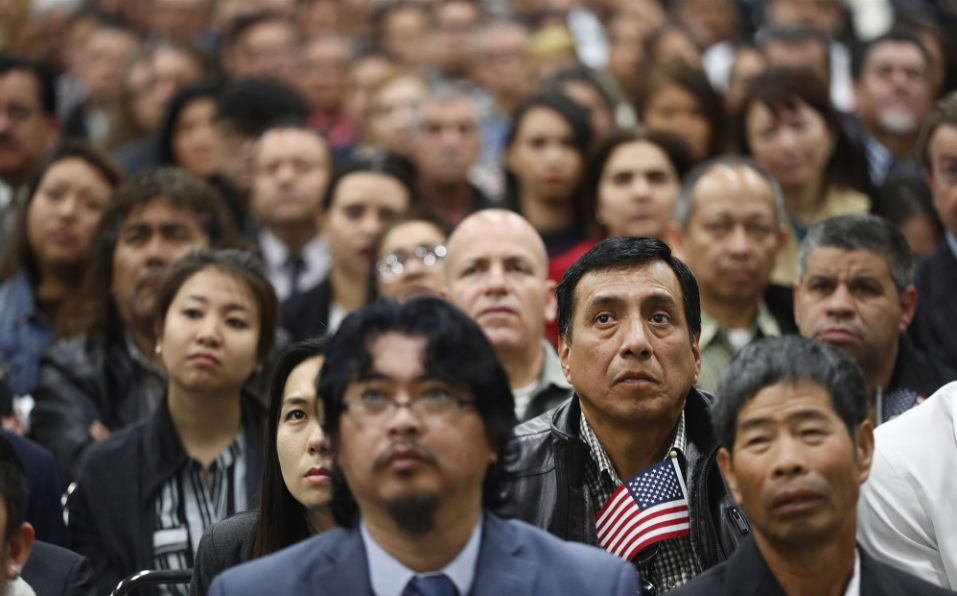 The backlog of pending applications for immigrants legally in the country trying to become U.S. citizens has “skyrocketed” under President Donald Trump, according to a new report from an immigrant rights organization.

There were nearly 730,000 pending naturalization applications as of the end of last year, a more than 87 percent increase since 2015 under President Barack Obama, according to the report from the National Partnership for New Americans, an alliance of immigrants’ rights groups.

“The Trump admin has built a second wall that prevents legal immigrants in the U.S. from becoming voting U.S. citizens,” Joshua Hoyt, executive director of the partnership, told NBC News.

He said the backlog at the United States Citizenship and Immigration Services means processing rates have reached as high as 20 months, raising concerns in a critical mid-term election year that some people will be unable to vote. Last year, over 925,000 people applied for U.S. citizenship, according to the report.

“They may be waiting for as much of 20 months after submitting a 21-page application, paid the $730 fee, submitted their fingerprints for a security a check and then sat and waited to take an exam,” he said.

“This is either absolute gross incompetence affecting close to a million legal immigrants who want to become U.S. citizens, or it is an intentional second wall that is designed to slow the pace at which lawfully present immigrants can become voters,” he said.

“The truth is that the total number of people the U.S. naturalizes each year has remained virtually unchanged. What we’re looking at is a dishonest and desperate attempt by open borders advocates to undermine the work of Homeland Security officials, law enforcement and the administration to protect the integrity of our immigration system and uphold the rule of law,” said spokesman Michael Bars in a statement. “The current pending workload does not equate to a backlog — it’s a statistic used in the USCIS report to include every application for naturalization filed including those filed in recent days and weeks — and is being inaccurately portrayed as evidence of delays”

“Many of these cases, which can remain pending from one quarter to the next, are well within the processing time goal established by the agency with variances being a direct result of geography and capacity USCIS will continue to process all applications and petitions in a judicious and comprehensive manner and will do so as efficiently and expeditiously as possible in accordance with the law,” he added. “We reject the inaccurate claims of those fundamentally opposed to this effort.”

The partnership announced the report’s findings later Monday at a news teleconference with Reps. Zoe Lofgren, D-Calif., and Luis Gutiérrez, D-Ill., and other immigrant rights groups.

The members of Congress also sent a congressional sign-on letter asking the director of USCIS to explain the backlogs and would call for congressional hearings and legal action to address the backlog,

The backlog was denying potential citizens the right to vote, and also left some at risk for potential deportation under Trump’s policies while their applications are pending, said Gutiérrez.

“The rules have changed — legal permanent residency does not protect you from deportation under Donald Trump,” he said. “People want to participate in the democratic process, they also want to protect themselves.”

Angelica Salas, executive director of the immigrant advocacy group the Coalition for Humane Immigrant Rights (CHIRLA), said, “More and more every day you have a situation in which legal permanent residents, even for minor violations decades old, are being visited by ICE.”

Salas said during the teleconference that their naturalization campaign for 2018 was looking towards the 2020 elections to support legal residents seeking the right to vote, despite the “insurmountable hurdles they face.”

“If you want to vote in November of 2020, you’ve basically got to apply in the next 60 to 90 days. That is something unconscionable,” he said during the teleconference.

Hoyt said the advocates were also working with Chicago Mayor Rahm Emanuel, a Democrat, for a mayoral sign-on letter. Sign-on letters are used by lawmakers to come together and express a view on a policy or political matter. He added that the group was planning to file a Freedom of Information Act request looking for internal communications and numbers regarding the backlog.

USCIS did face a higher backlog after Obama was first elected, Hoyt said, but officials worked to curb that backlog to about 8 or 9 months.

Hoyt said his advocacy group has been tracking the backlog of citizenship applications for years and had never seen numbers like this.

He noted that while the backlog is ongoing, USCIS has launched an office focusing on identifying Americans suspected to have used fraudulent means to get their citizenship — and then strip them of it.

USCIS Director L. Francis Cissna told The Associated Press the agency is hiring dozens of lawyers and immigration officers to review cases and look for immigrants who were ordered deported and then used fake identities to later obtain green cards and eventually citizenship.

“We finally have a process in place to get to the bottom of all these bad cases and start denaturalizing people who should not have been naturalized in the first place,” Cissna said. “What we’re looking at, when you boil it all down, is potentially a few thousand cases.”

Hoyt said the move was a poor use of resources considering the current backlog.

“They’re not paying attention to their core responsibility of processing people in a timely manner,” Hoyt said. “Instead they’re on a witch hunt to try to denaturalize citizens who have been here for over 20 years.”

Salas said denaturalizations were very uncommon in the past.

Authorities would have to “demonstrate high, high levels of violation of any type in order for a person to be denaturalized,” she said. “It was something that was very, very rare.”