On July 17, 1955, Southern California unveiled the Happiest Place on Earth with the opening of Disneyland Park in Anaheim.

The iconic theme park at 1313 Disneyland Drive, a sprawling area covered with orange groves, was a dream come true and a design come to life for Walt Disney. Construction began in 1954 and the magical place where parents and children could have fun together opened its gates a year later. The moment was captured in a famous photo that shows eager children dashing through Sleeping Beauty’s Castle.

The opening ceremonies included celebrities like Frank Sinatra, Ronald Reagan and Art Linkletter, and the immortal words of Walt Disney, “To all who come to this happy place, welcome…” Scroll down for photos from the earliest days of the Happiest Place on Earth.

Opening Day at Disneyland in 1955? It was warm, very warm, on that fabled July 17th. And busy, too: Just about everyone wanted a look at Walt Disney’s famous dream.

Originally covered with orange groves and made up of parcels of land owned by 17 different people, Walt Disney purchased 160 acres in Anaheim to build his dream of a place where parents and children could have fun together. Construction would begin in 1954.

Of course, before Disneyland debuted in Anaheim on July 17, 1955, it was a map that was created to attract investors to the idea. The hand-drawn map created by Walt Disney and Herb Ryman over a weekend in 1953 just sold at a Van Eaton Galleries auction in late June 2017 for over $700,000.

Not long after the dream existed only in the form of a map? It became a bustling real-life construction site. Workers, in this photo, prepare to pour cement where the northern edge of Town Square meets Main Street USA.

Two months before she “awoke” to opening day visitors, Sleeping Beauty’s Castle was getting a few final touches from construction workers. Walt Disney wanted this castle to be a friendly and welcoming presence in his park so it was built on a smaller scale than its European counterparts.

Only days before opening day, a crane lifts the Rocket to the Moon during construction of Tomorrowland. 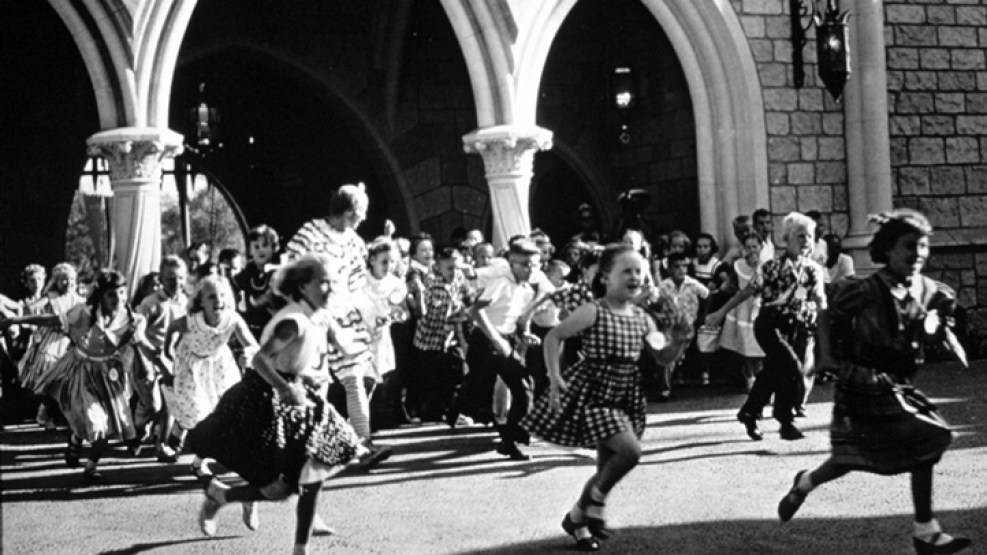 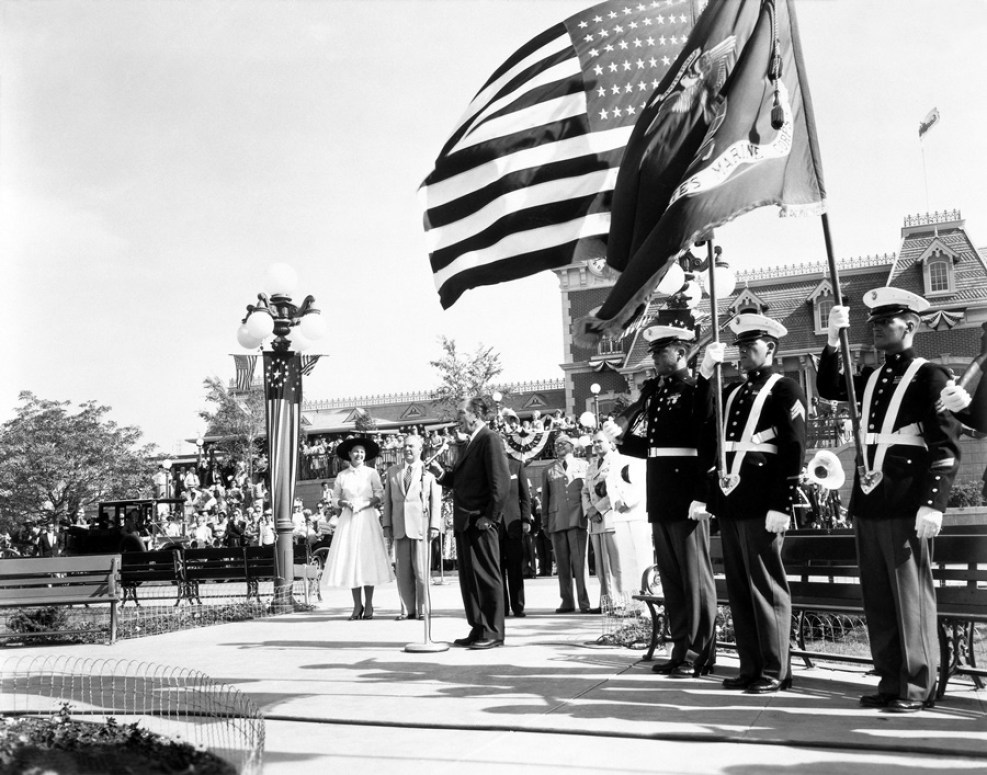 The opening ceremonies were full of pomp, music, and the eternal words of Walt Disney, which may be found upon a plaque near the Main Street flagpole: “To all who come to this happy place, welcome…” is the opening sentence known by fans around the world. 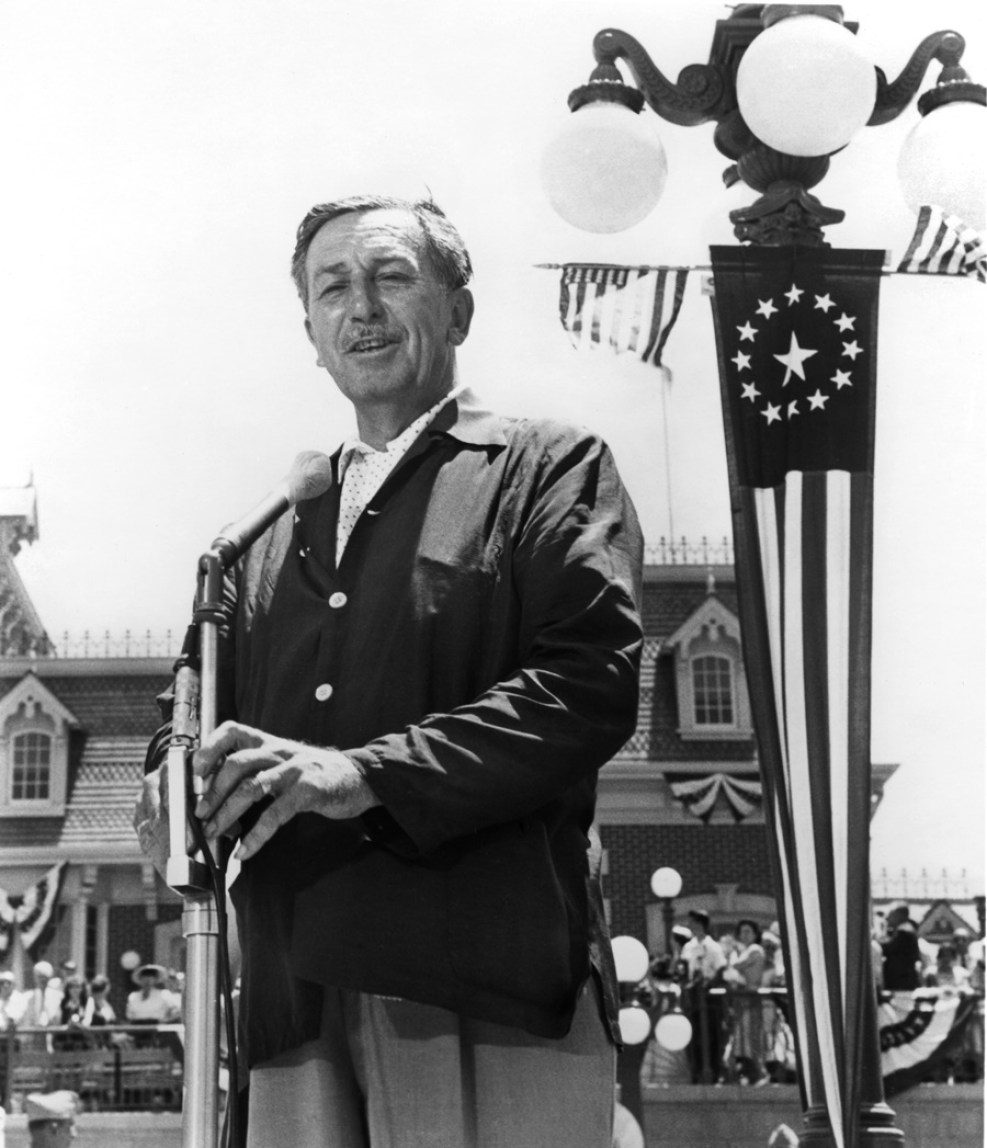 Mr. Disney was the star of the opening, but other celebrities, including Frank Sinatra, were in the park that day. Ronald Reagan and Art Linklater helped to perform hosting duties for audiences at home. 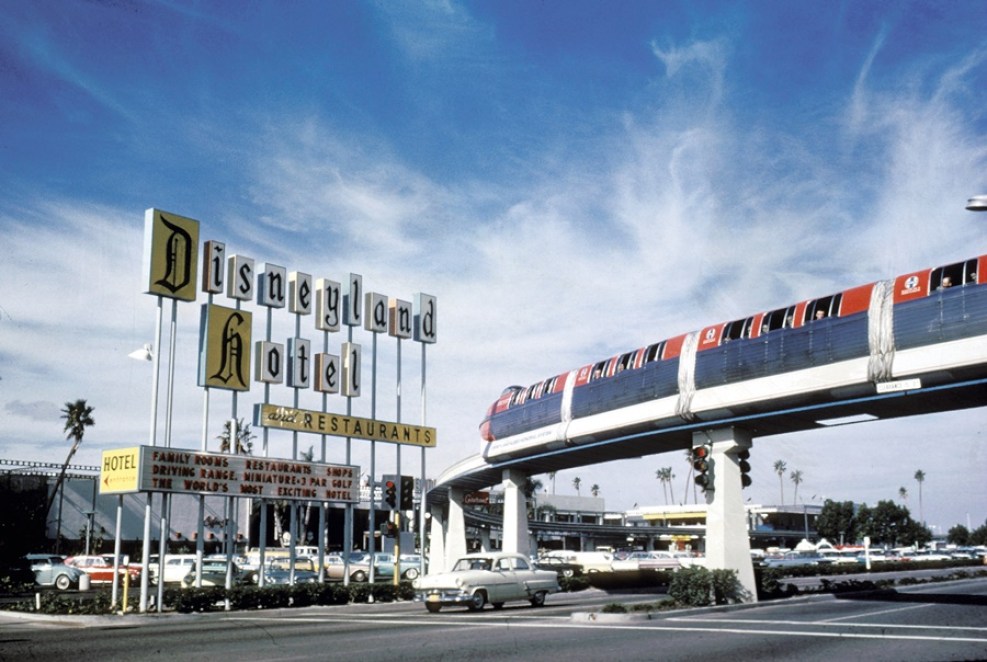 The Disneyland Hotel opened across the street from Disneyland in 1955, but was built and owned by Walt’s friend, Jack Wrather until purchased from The Wrather Corporation in 1988. The Disneyland Monorail track was expanded in 1961 to transport guests to and from the hotel, making it the only monorail in the country to cross a public street. 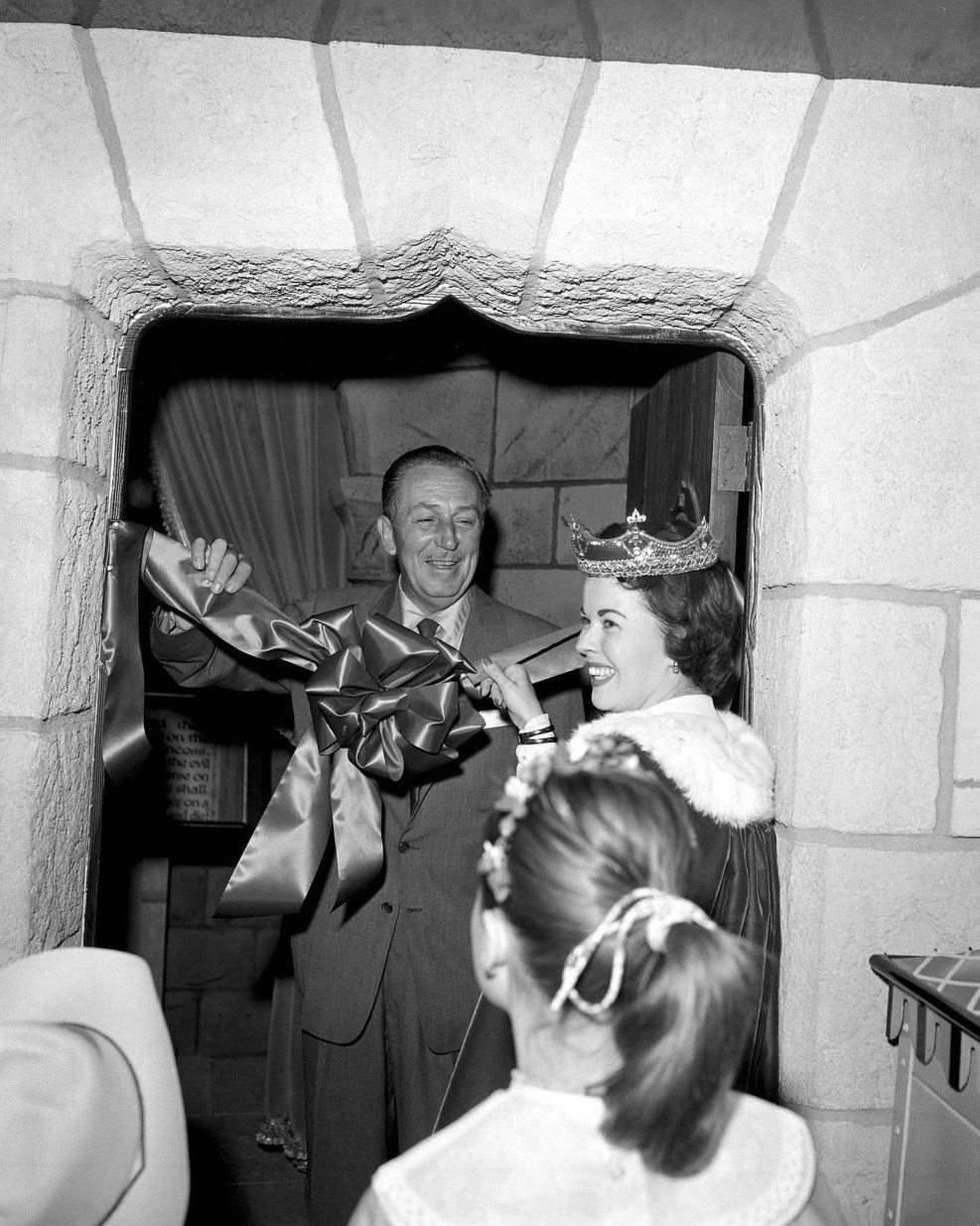 Former child star and future diplomat Shirley Temple joins Walt Disney at the opening of the Sleeping Beauty Castle walk-through at Disneyland on April 29, 1957. The walk-through, located inside the iconic castle, featured the story of Disney’s ‘Sleeping Beauty’ told through a series of dioramas. 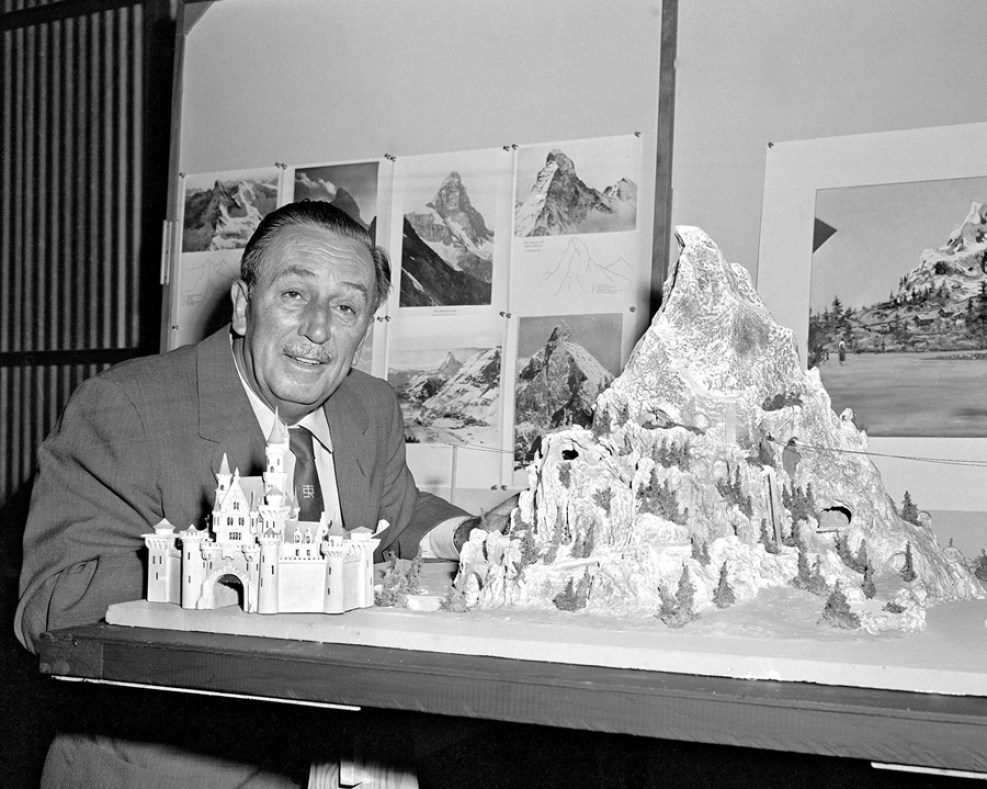 Walt Disney reviews a model for the Matterhorn Bobsleds which opened in 1959 at a height of 147 feet. 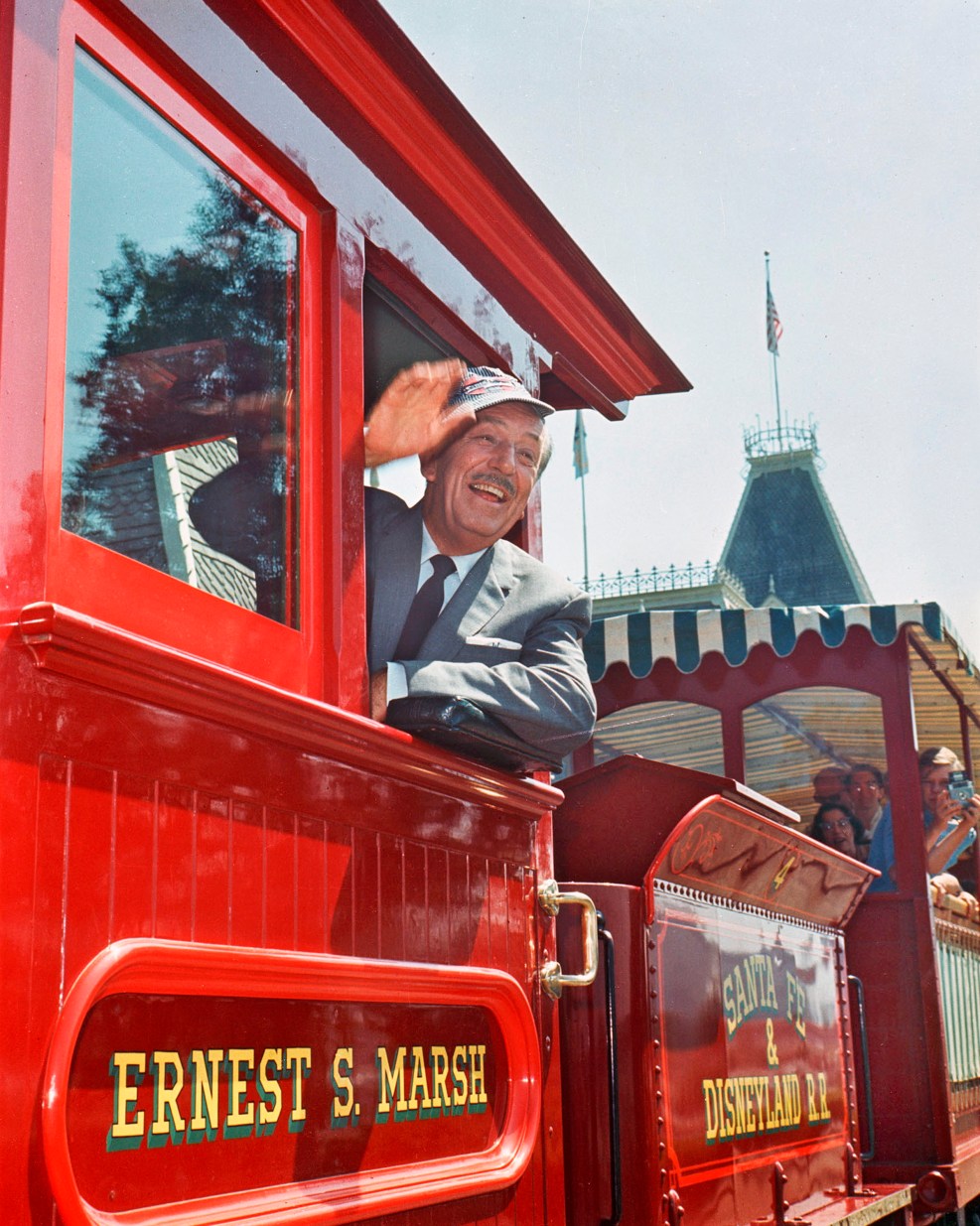 One of Disneyland’s original attractions from opening day and arguably Walt Disney’s personal favorite, the trains of the Disneyland Railroad provide guests an overall view of the park as well as the Grand Canyon and Primeval World dioramas. This later photo shows the railroad in the 1960s. 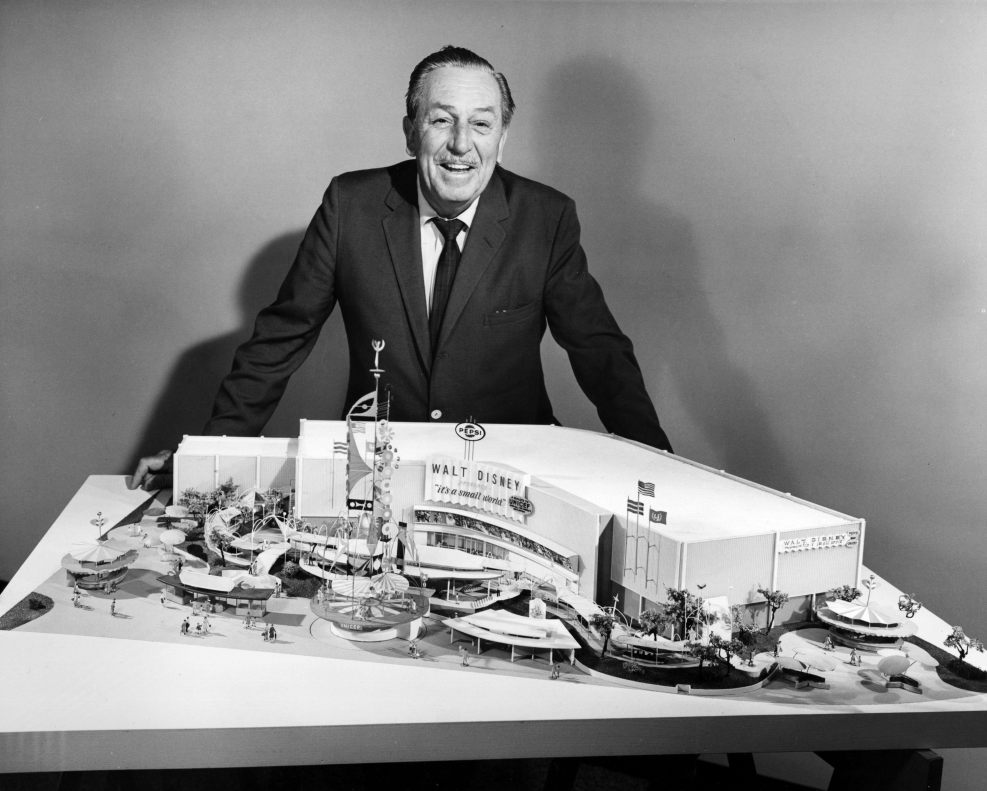 Even after Disneyland’s opening, Walt Disney continued to invent new attractions and lively additions to the existing lands. 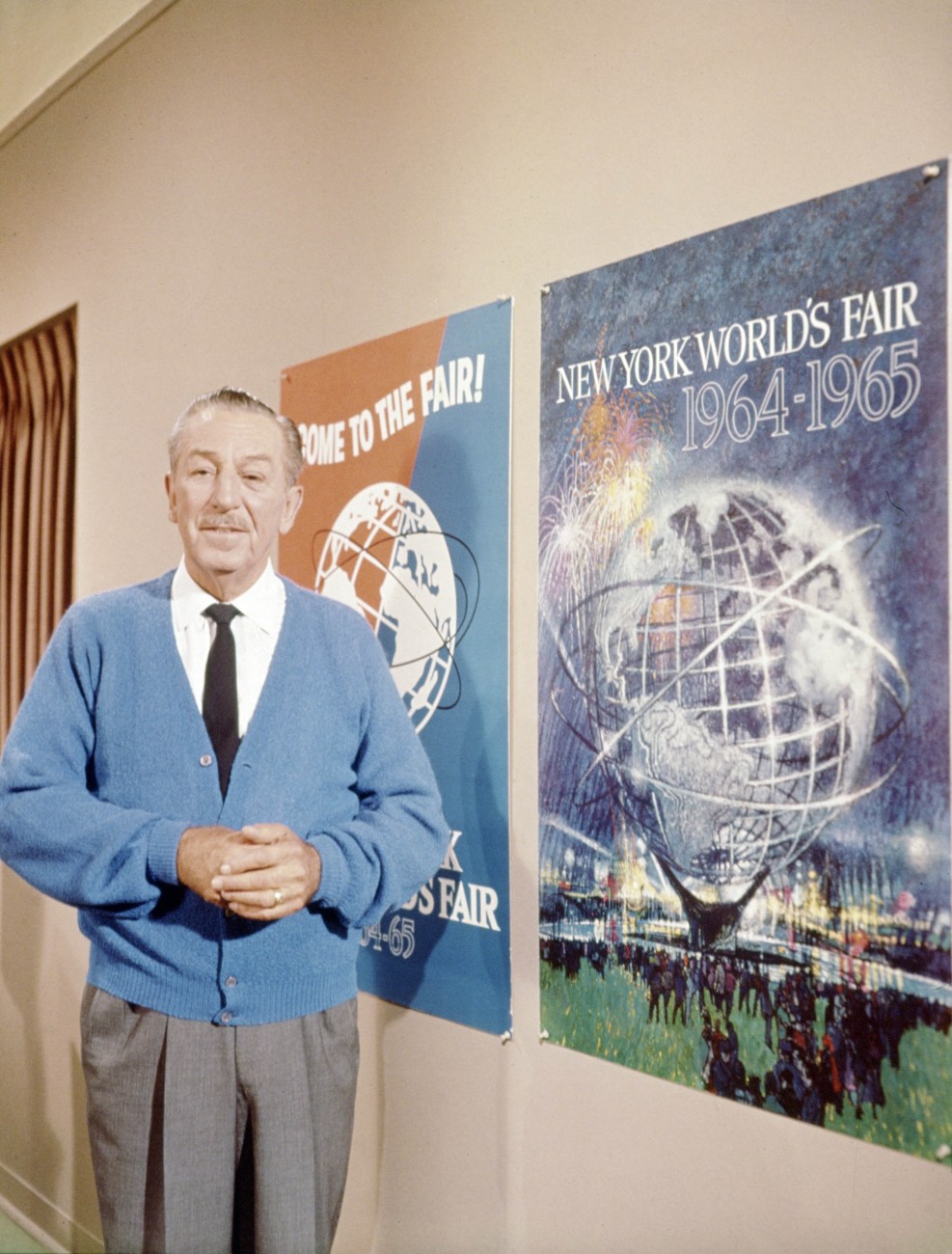 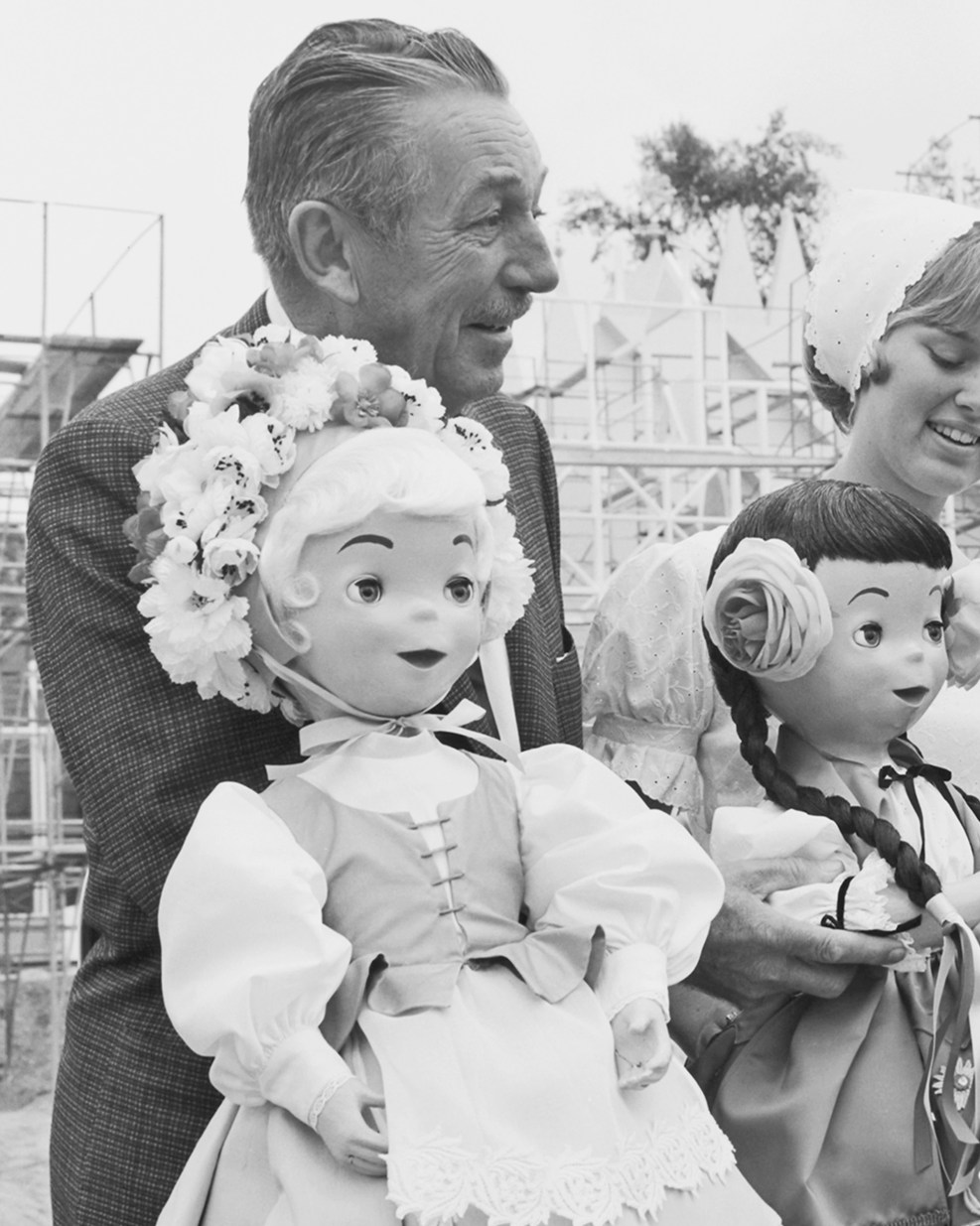 Walt Disney “meets” some residents of the It’s a Small World attraction at Disneyland in California, during construction in May, 1966. One of the most popular Disney attractions of all time, the show is a fun-filled and whimsical salute to the children of the world that conveys its message of peace and harmony through the international language of music. 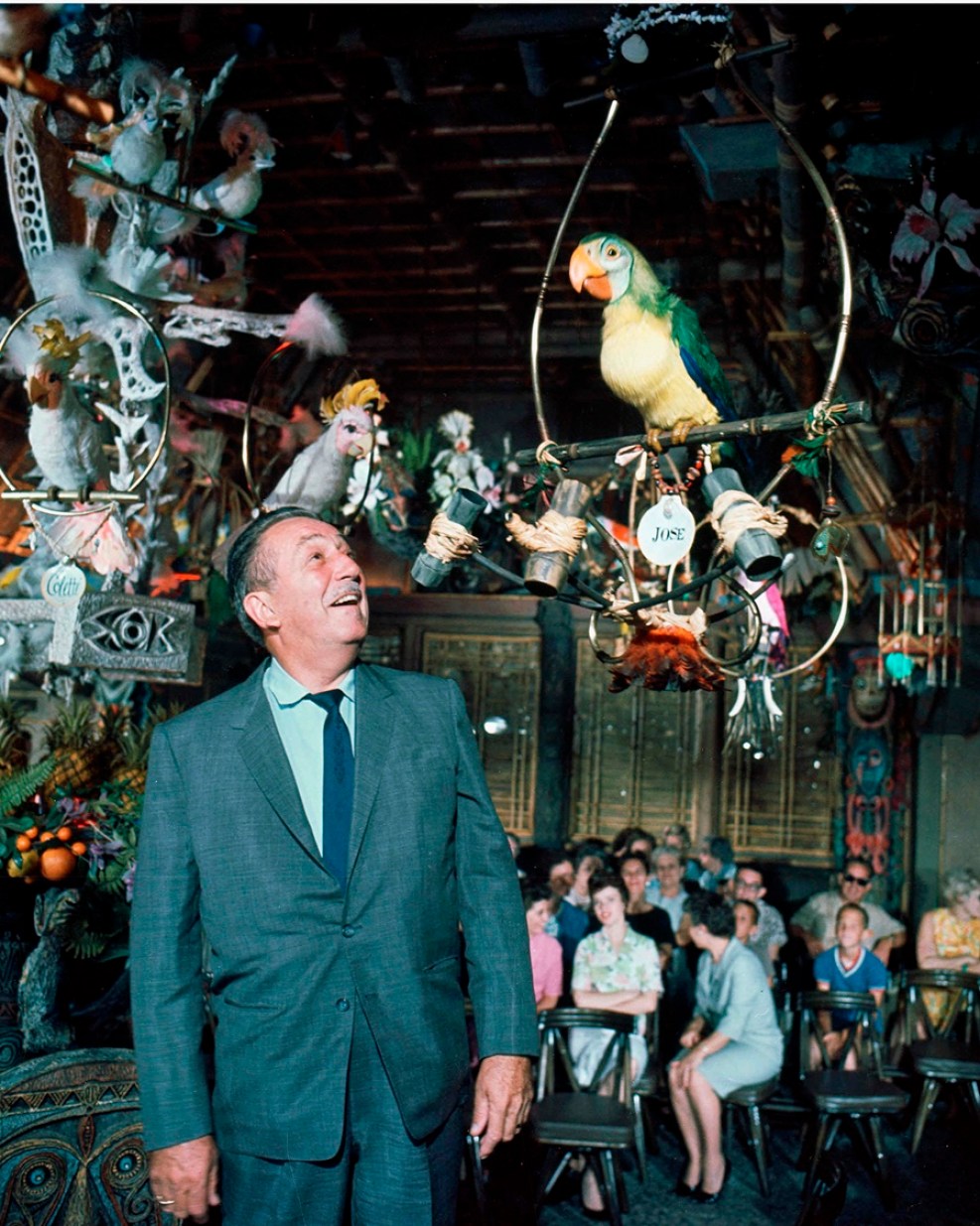 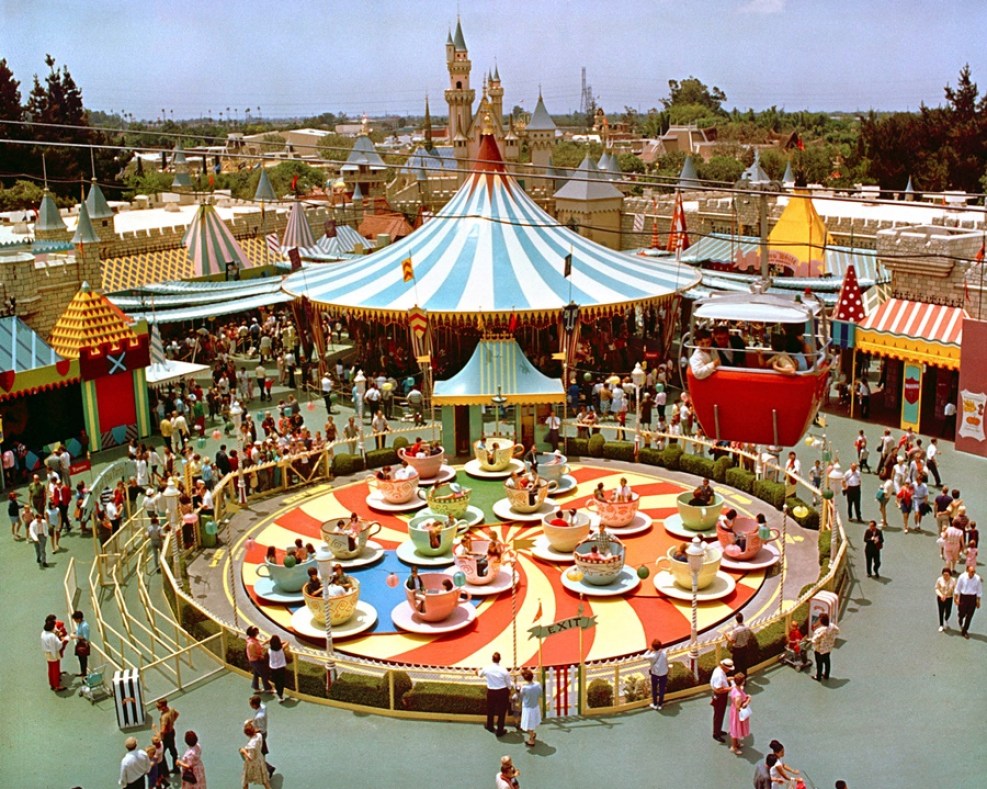 This opening day attraction, based on a scene in “Alice in Wonderland,” spins Disneyland guests in giant teacups. Pictured here at its original location, it was moved near the Matterhorn in 1983 during the construction of the new Fantasyland.

Walt Disney, daughter Diane Disney Miller, and grandson Christopher Miller in an Autopia car at Disneyland, c. 1957. Mr. Disney’s vision is still hums on at his original park, at nearby Disney California Adventure, and at Disney theme parks around the world.