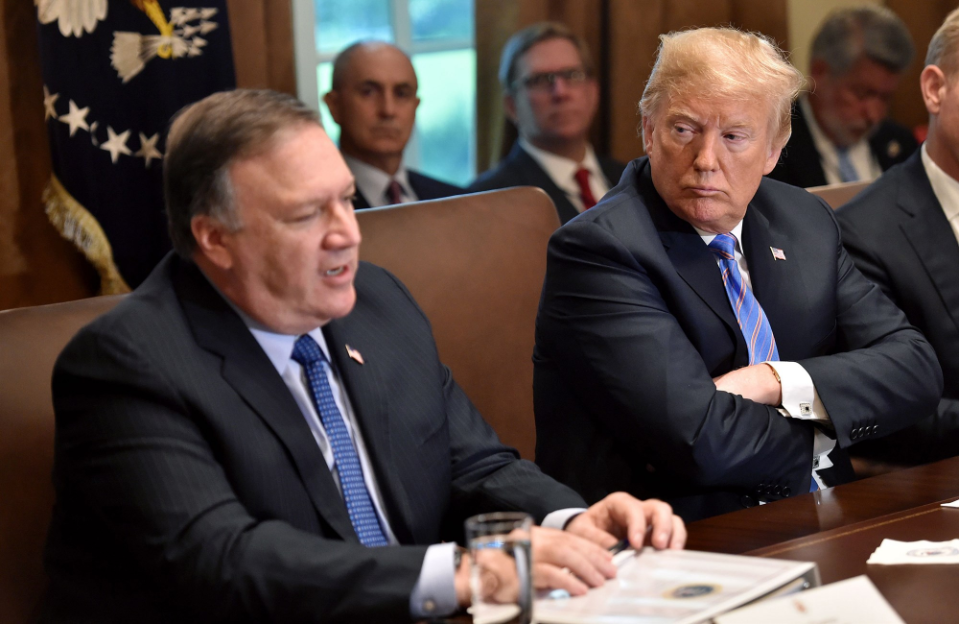 President Donald Trump said on Wednesday that he does not believe Russia is still targeting the U.S., day after he attempted to quell the backlash over his widely rebuked comments in Helsinki where he contradicted his intelligence community’s assessment that Moscow had interfered in the 2016 election.

“No,” the president answered when asked if Russia is still trying to influence American elections. “We’re doing very well, probably as well as anybody has ever done with Russia.”

He added, “There’s been no president as tough as I have been on Russia…President Putin knows that better than anybody, certainly the media, he understands it, he’s not happy.”

The president did not answer a shouted question from reporters about whether he believed Putin’s assertion that his country did not orchestrate a campaign to interfere in the 2016 election.

The president’s position that Russia is not currently targeting the U.S. contradicts the position of his own director of national intelligence Dan Coats, who said last week that Russia’s actions are “persistent” and “pervasive.”

“Russian actors and others are exploring vulnerabilities in our critical infrastructure as well. DHS and FBI, in coordination with international partners, have detected Russian government actors targeting government and businesses in the energy, nuclear, water, aviation and critical manufacturing sectors,” Coats said.

“The warning signs are there. The system is blinking. And it why I believe we are at a critical point.”

“A BIG discrepancy between President Trump’s statement and DNI Coates’ warning,” Graham tweeted on Wednesday. “It’s imperative we get to the bottom of what is going on so we can be prepared to protect ourselves in advance of the 2018 elections. My personal view: the Russians are at again.”

Trump faced a wave of bipartisan criticism Monday after his joint press conference in Helsinki with Russian President Vladimir Putin, which came just days after special counsel Robert Mueller indicted 12 Russian intelligence officials for meddling in the election and provided a detailed account of their operations.

The president attempted to clean up his remarks on Tuesday stating that he misspoke when he said on Monday that he did not see why Russia would have meddled in the election, saying he meant to say he did not see any reason why it wouldn’t have been Russia that interfered.

“I realized that there is a need for some clarification,” Trump said Tuesday at the White House. “The sentence should have been…’I don’t see any reason why it wouldn’t be Russia.'”

At the Monday press conference with Putin, Trump said about election meddling in 2016: “[Putin] just said it’s not Russia. I will say this: I don’t see any reason why it would be.”