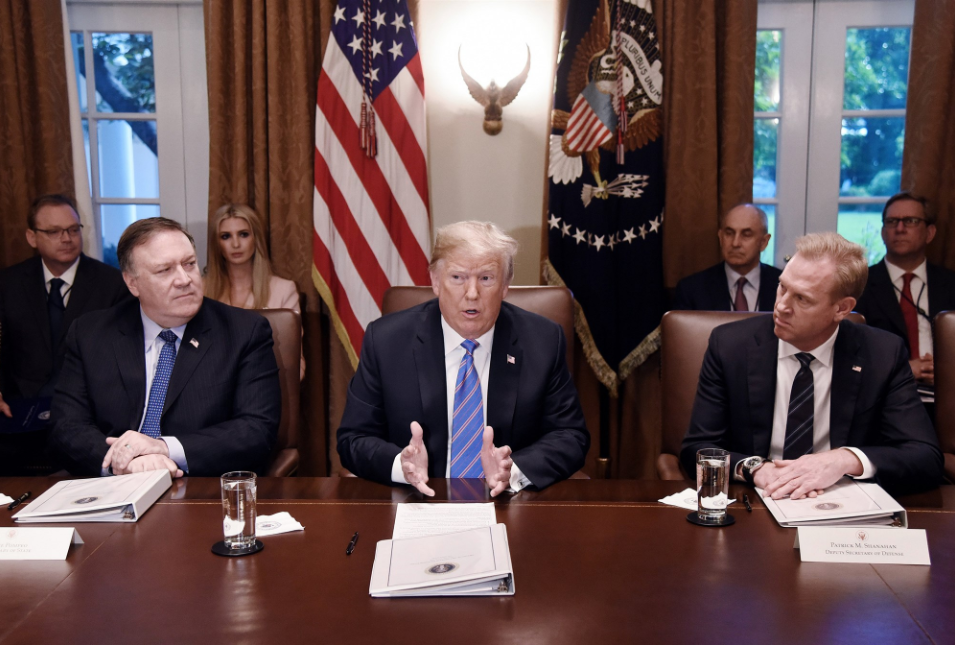 For the second time in two days, the White House responded to widespread criticism of a controversial remark by President Donald Trump with the explanation that he actually held the position opposite of the one he had apparently expressed.

White House press secretary Sarah Sanders said Wednesday that the president agreed with the assessment of the intelligence community that Russia is looking to interfere with U.S. elections this year, and that his response of “no” earlier in the day to a reporter’s question about whether he held that view had been his way of indicating that he was not going to respond to any questions from reporters.

“And there’s been no president ever as tough as I have been on Russia,” he added. “All you have to do is look at the numbers, look at what we’ve done, look at sanctions, look at ambassadors, not there, look unfortunately at what happened in Syria recently, and I think President Putin knows that better than anybody, certainly a lot better than the media.”

The president did not answer another shouted question from reporters about whether he believed Russian President Vladimir Putin’s assertion that his country did not orchestrate a campaign to interfere in the 2016 election.

Sanders also told reporters at the White House press briefing Wednesday that Trump had waited a full day to offer the official explanation for his controversial Monday remark in Helsinki that appeared skeptical of U.S. intelligence assessments of Russian election interference because that was his first chance to publicly respond after reviewing the transcript from Helsinki.

And in a contentious exchange with a reporter later in the briefing, Sanders doubled down on her assertion that the president was saying “no” to reporters asking questions. She also contended that her explanation was not walking back the president’s earlier remarks.

“Actually, I’m interpreting what the president said, I’m not reversing it,” Sanders told NBC’s Hallie Jackson. “I was in the room as well and I didn’t take it the way you did.”

Sanders also responded to a question about the president’s credibility with the American people, since he has often said, following criticism, that his remarks have been misinterpreted.

“I think that you can take the fact that the president has credibility because he saw that he had misspoken and he wanted to clarify that yesterday, which he did. So when he sees that he’s misspoken, he comes out and says that,” Sanders said.

On Tuesday — following a bipartisan backlash to his comment at a news conference with Putin that “I don’t see any reason why it would be” Russia who had meddled in the 2016 election — Trump said that he had actually intended to say that he didn’t see any reason why it “wouldn’t” be Russia, despite his expression of confidence in Putin’s denial of interference.

“I realized that there is a need for some clarification,” Trump said Tuesday.

He added then that he had “full faith and support” for America’s intelligence community and its conclusion that Russia alone targeted America’s elections.

“Russian actors and others are exploring vulnerabilities in our critical infrastructure as well. DHS and FBI, in coordination with international partners, have detected Russian government actors targeting government and businesses in the energy, nuclear, water, aviation and critical manufacturing sectors,” Coats said, referring to the Department of Homeland Security.

“The warning signs are there. The system is blinking. And it is why I believe we are at a critical point.”

Sen. Lindsey Graham, R-S.C., who is on the Senate Judiciary Committee, swiftly reacted to Trump’s Wednesday statement, saying he believed the Russians are still making efforts to disrupt U.S. elections.

“A BIG discrepancy between President Trump’s statement and DNI Coates’ warning,” Graham tweeted on Wednesday, misspelling the intelligence director’s name. “It’s imperative we get to the bottom of what is going on so we can be prepared to protect ourselves in advance of the 2018 elections. My personal view: the Russians are at again.”

After the White House attempted to clarify Trump’s Wednesday remarks, Graham told reporters that he was glad to hear the White House’s explanation and advocated for an “entire whole of government approach” to future Russian election interference.

“If it’s true that that’s what the president meant, then I am very relieved because it is overwhelming that they are trying to interfere in the 2018 election,” Graham said.