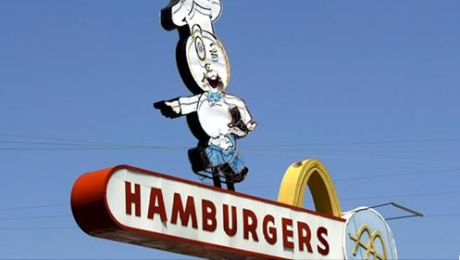 There are many McDonald’s restaurants, tens of thousands of them, of course, but only one McDonald’s can wear the lofty crown of Oldest Operating McDonald’s in Existence.

It isn’t the first McDonald’s ever constructed — San Bernardino can boast about that singular title — but the Downey’s McDonald’s has been sizzling up burgers and serving soft drinks since 1953.

A quick bit of math, then, tells us that this iconic eatery, which McDonald’s mavens and pop culture fans regularly flock to for photographs, is turning 65 in 2018. And, as befits its historic status, there’s a celebration planned for its 65th anniversary, on Saturday, Aug. 18.

The host? The Downey Conservancy, a group that has actively worked to protect and raise the Downey McDonald’s profile over the years, as well as other mid-century structures.

The address? Roll your hot rod, or whatever stylin’ vehicle you’re driving, for 10207 Lakewood Boulevard in Downey.

The time? Picture “late lunch” in your mind, and show up to buy those classic fries and that classic burger from 1 to 3 in the afternoon. You’ll want to raise a bun-and-meat to a famous fast-foodery’s most famous location, surely?

Well, there are other well-known McDonald’s around the globe, restaurants that are famed for their size or unusual menu items or architecture. But holding the record of “oldest operating” is a smooth as a milkshake and as snappy as the secret sauce that tops a Big Mac.

More details are to come on the fast food festivity, so check in with the Downey Conservancy, or make plans to do lunch at the sure-to-be-bustling landmark on Aug. 18.