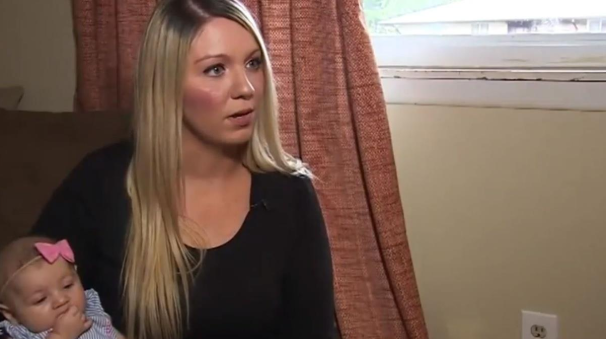 A Michigan woman called 911 after her daughter became locked in a hot car by mistake, but no one came to help.

Lacey Guyton, of Waterford, told WXYZ that it was the scariest moment of her life when she locked her 2-month-old baby in the car while visiting her grandmother.

“The keys are in my diaper bag. I put the diaper bag in the car, put Raina in the car and shut the door and then all of a sudden it locks,” she said.

She immediately called 911, but the dispatcher reportedly wouldn’t send help.

“I need someone with signs on their car that can move traffic over, I don’t have much time,” Guyton said. “She had two chances to send somebody and both times she didn’t.”

Guyton said she was stunned by what the dispatcher told her.

“We don’t send people out to unlock cars or break windows,” Guyton recalls the dispatcher saying before offering to connect her to a tow company.

Without a better option, the mother took matters into her own hands.

“I saw her start to close her eyes and I just ran to the back window and smashed it open,” she said.

“She was really sweaty, screaming, and just drenched in sweat,” Guyton told Fox 2.”She was probably in there like 10 minutes, so we immediately got her out, got her inside, cooled her down.”

“It’s the most helpless feeling to see your great grandbaby in there crying and drenched in sweat,” grandmother Mary Riley said. “We want this corrected. We don’t want anybody to lose their baby because this wasn’t taken care of for us.”

Waterford police called Guyton to apologize for what happened.

“It’s a common sense issue,” Chief Scott Underwood said. “You call 911, you expect for somebody to come and give you some help, and we certainly should have gone and done that. We made a mistake and we need to fix that.”

Underwood said the dispatcher will face some disciplinary action.

Mother and daughter are both now doing well.