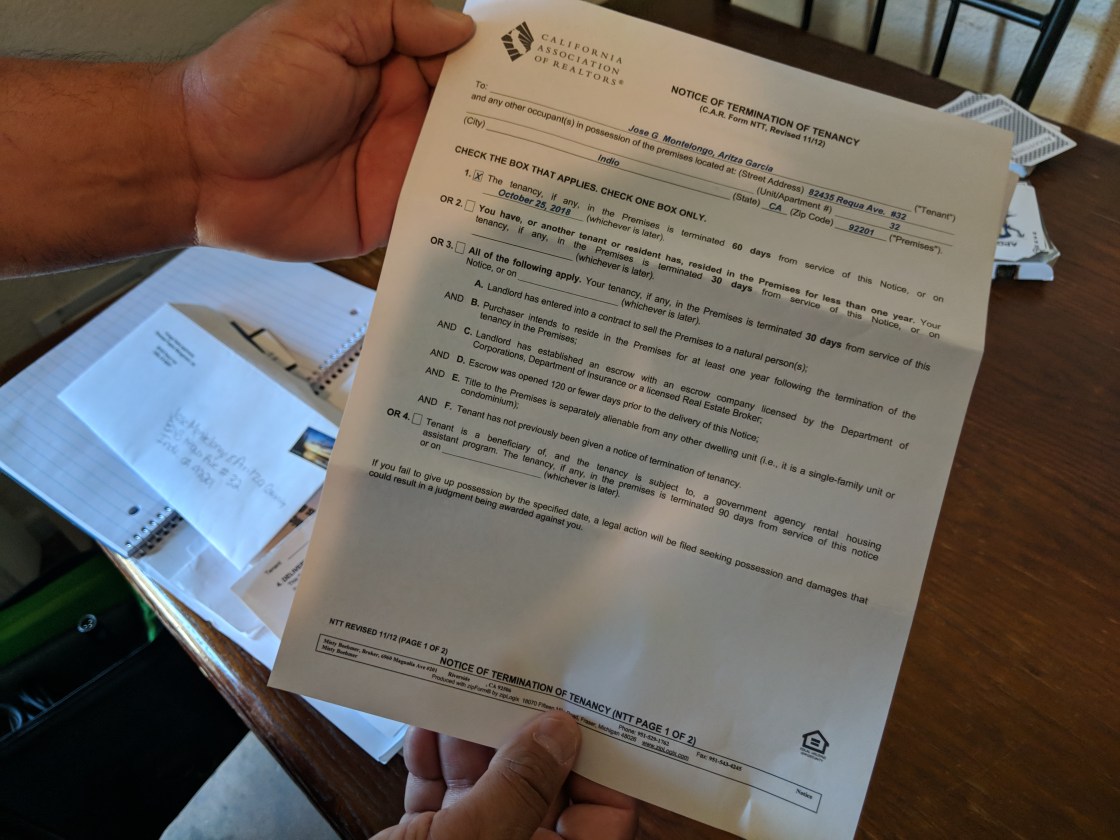 Several tenants at Vintage Palm Apartments in Indio claim the new management is mistreating the long-time residents, with at least one family’s tenancy terminated.

Jose Montelongo raised his family in one of the units at the Indio apartments. He and his wife are now being asked to leave and he is desperate to find a new home.

Montelongo said, “I am going to move after living here for 10 years without a problem, the new management is changing, they are removing us and I don’t think it’s fair.”

He was given a termination of tenancy letter and was given until October 25 to leave.

“I went to go ask why they were doing it,” Montelongo said. “And they said they do it because they have the right to remove people, tenants, whenever they want because the law allows it.”

Technically it is lawful for landlords to terminate a tenancy without cause on 30 to 60-days notice, depending on how long a resident has lived there.

But Montelongo suspects a set-up when he asked to renew a contract he was told it was not necessary.

He also claims one of his cars was towed for not having a parking sticker on his windshield, even though he pays $25 every month for a second parking spot. He was told he had to have the sticker on at all times by the manager when he confronted her.

He believes he was singled out as he points to at least two cars parked inside the apartment complex without a sticker on the windshields.

Montelongo said he is still not able to afford the fee to pay the impound to get his car back. He accepts it as a loss now.

Montelongo said, “She told me she came with a mission to clear out all Latinos and bring Americans.”

A neighbor who lives across from Montelongo who rather not share her name was in the middle of moving out, she said she does not like the treatment from management and likes the rent hike from $700 monthly to $1000 even less.

“The water leaks from the toilet and goes onto the carpet and there we are trying to dry it,”  a former tenant said. “And for me, it is not fair they are charging us that amount under these conditions for me are just not worth it.”

It is not out of the ordinary for new ownership to raise the rent to follow the market, nearby apartments almost reach $1000 in rent.

However, these tenants said they are not fighting because of money, they simply want respect.

Montelongo said, “I don’t want to stay quiet and see my neighbors, and entire families leave with young children because of threats they make, without them being able to defend themselves.”

The Riverside Property Management oversees Vintage Palm Apartments, it declined to comment on this story.

As for Montelongo, he reentered the housing market after ten years away.