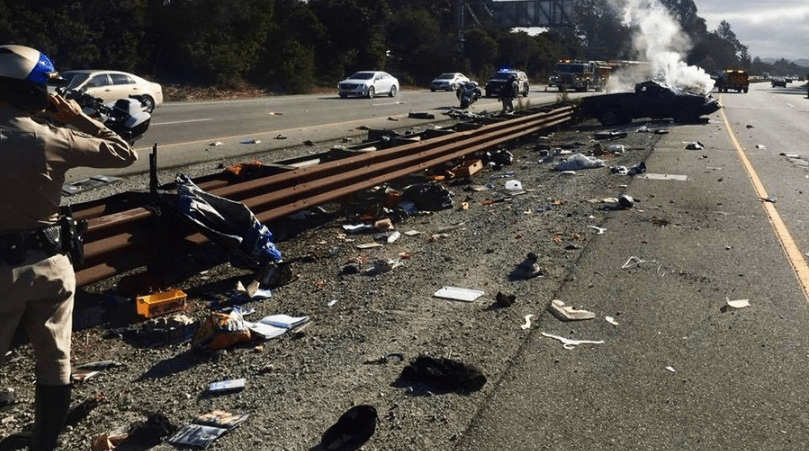 A 5-year-old boy was ejected from a pickup truck on Highway 1 in Capitola, California, when the truck flipped five times Tuesday morning.

The boy’s mother was distracted while driving because she was using her cell phone, the California Highway Patrol said.

“A (5-year-old) passenger was not properly secured in a child safety seat and was ejected from the vehicle. The child sustained major injuries and was air lifted to a trauma center,” the CHP said.

Officers found the boy’s seat belt still buckled in the mangled truck, so they suspect that the boy slipped out.

“It was an absolutely awful, traumatic scene,” CHP Officer Sam Courtney said. “As soon as the truck started rolling, he came out of the truck.”

There was no child safety booster seat in the car.

Children who are 8-years-old and younger are required by law to be secured in a booster seat. Some children require booster seats longer, until they are at least 4-feet-, 9-inches tall and weigh 65 pounds.

“CHP reminds you to always properly secure your children in a car seat or booster. We will also show you how to properly install your seat. Don’t assume a seat belt will restrain a child who is not at least 4’9. Tragically this child could have been uninjured if he were in the proper seat,” the CHP wrote on Facebook.

The mother suffered moderate injuries and was also transported to a trauma center. She was identified as a 40-year-old woman from Watsonville. Her name was not released.

CHP Sgt. Grant Boles said investigators will look into the possibility of recommending criminal charges against the driver.

No other vehicles were involved in the crash.

“This is an unfortunate lesson to other parents,” Boles said.

Last month, a 3-year-old boy was ejected from a Ford F-150 pickup truck on Highway 101 near Salinas.

The boy was sitting in a child booster seat behind the driver, but his seat belt was not properly fastened, CHP investigators said. The boy was thrown 30 feet and landed on the southbound lanes.

“The child was alert and crying when first responders arrived,” the Monterey County Sheriff’s Office said.

The 3-year-old boy was treated at a trauma center for major injuries. He survived, and was released from the hospital one week after the crash, the CHP said.