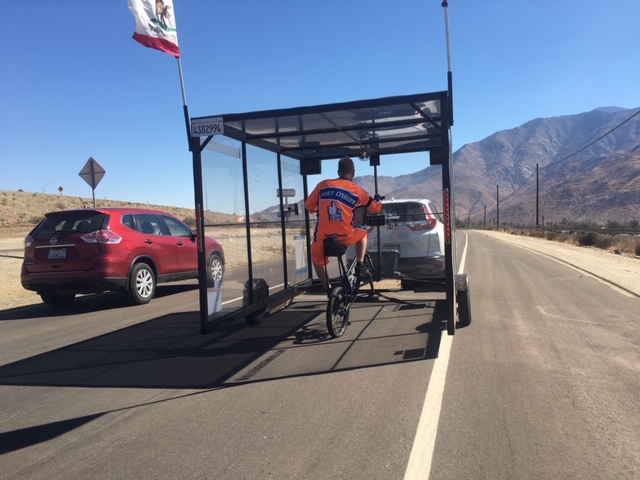 A world record holder is riding his BMX bike across America, attempting to break yet another record, and he’s doing it in spectacular fashion. The entire journey will be done on one wheel.

Kurt Osburn started his wheelie across America on October 12th in Santa Monica.

“Some people call me the wheelie king, I wouldn’t consider that but that’s what a lot of people do call me,” Osburn said.

On Monday he was in the Coachella Valley, on his way to Coco Beach, Florida. Osburn is hoping to complete the 2,900 mile journey in a record breaking 45 days.

“It’s brutal. It’s night and day from riding a wheelie compared to just riding a bicycle. Takes a lot of upper body strength, it just destroys your lower back,” said Osburn.

He would know since he’s made the journey before. In fact, Osborne is attempting to break his own record set back in 1999.

“I’m trying to do this in 45 days. So I’m trying to shave off almost thirty days. So my pace needs to be around 70 miles a day,” Osburn said.

On the route to Florida, there are is no shortage of obstacles keeping him from completing his mission.

Working with several organizations including PHIT America which gives grants to schools who have lost their physical education programs, Osborne hopes his record breaking feat will inspire younger generations to put down their phones and make fitness a top priority. Just like his idol Jack Lalanne.

“My hero is Jack Lalanne, so basically I’m trying emulate some of his world records. I know they are not nearly as insane as his or challenging as his but this is going to be my first step. After I do this record, then I’m have multiple other world record I’m going to be doing,” Osburn said.