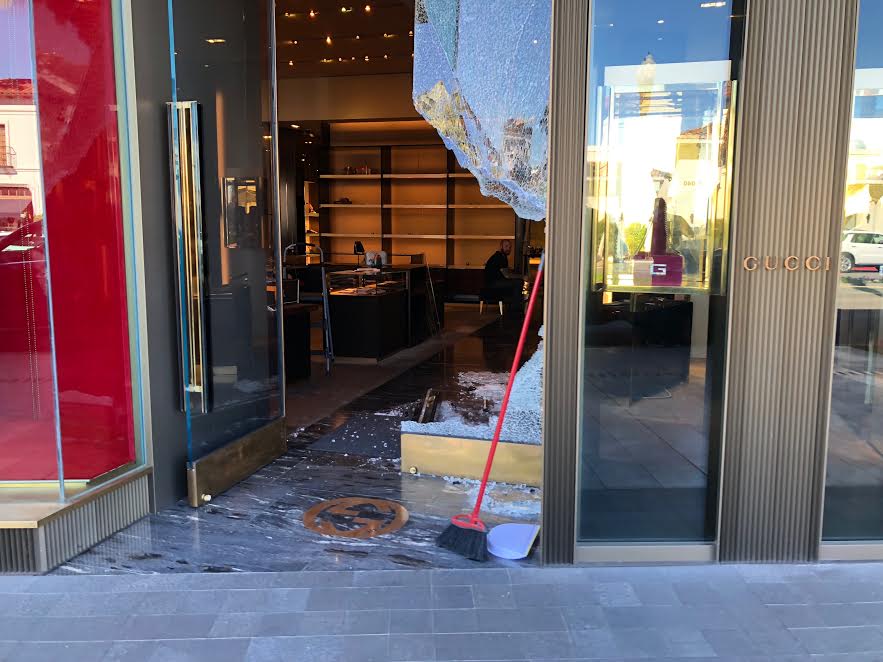 A brazen robbery at Gucci on El Paseo has shaken the community. According to the Riverside Sheriff’s Office, the suspects fled the scene and are still at large. Now, instead of seeing purses at the display windows, all you will see is shattered glass and empty shelves.

This robbery unfolded at the high-end store on El Paseo at around 3:30 in the morning.

“I drove up and I just saw a lot of glass,” she added.

This smash and grab comes as no surprise to Debra, who has been in the business for over three decades.

“It’s something that unfortunately we’ve become accustomed to.”

The suspects hopped into at least two cars and speed off before officers arrived. Once they were at the store there were obvious signs of forced entry.

A high-speed chase then ensued on the interstate-10 toward Banning. Then, a second pursuit initiated from another car seen in the area, and also ended up on that same freeway, going westbound.

Debra tells NBC Palm Springs that she’s seen many robberies within her time in the industry, but assures that people have nothing to be scared of.

“Well, of course, you’re always on guard, but you can’t live in fear. When you own real estate and you have things that people want, you have to be cautious.”

While the suspects are still at large, Debra says she is confident that justice will be served.

“Karma is something else. And I just believe that what you put in life is what you get back.”

She also tells NBC Palm Springs that this unfortunate event should not discourage people from having a good time on El Paseo.

“Keep supporting us. This is a great place here on El Paseo. Don’t stay away, don’t be afraid. We’re all here every day.”

The Riverside County Sheriff’s Office says there is still no word on how much merchandise was stolen from the Gucci store on El Paseo.