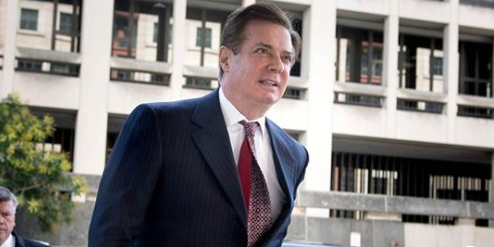 The disclosure was made by Manafort’s lawyers in a poorly redacted section of court papers that were filed to rebut the special counsel’s allegations that he lied to federal investigators.

The redacted section says that Manafort was not truthful about providing polling data related to the 2016 presidential campaign to Konstantin Kilimnik.

The court papers also include poorly redacted lines that say Manafort and Kilimnick discussed a “Ukraine peace plan” on more than one occasion. The redacted section also says Manafort initially told investigators that he hadn’t met with Kilimnik in Madrid but the longtime GOP operative later admitted to the meeting after being told Kilimnik was there the same day.

The documents do not say when the meeting took place.

Kilimnik was charged with obstruction of justice last June for alleged witness tampering in a case against Manafort. Kilimnik has denied having any links to Russian intelligence. His whereabouts are unknown.

Last August, Manafort was convicted of bank and tax fraud charges. He later agreed to cooperate with special counsel Robert Mueller’s office to avoid trial in a separate case on financial fraud charges.

But Manafort broke the cooperation agreement by telling multiple lies to investigators on a host of topics, including his contacts with Trump administration officials and Kilimnik’s role in the effort to coerce witness testimony, according to the special counsel.

In the court papers filed Tuesday, Manafort’s lawyers pushed back against the special counsel, saying he never lied to federal investigators.

Manafort “provided complete and truthful information to the best of his ability” over the course of 12 meetings with federal prosecutors and FBI agents, the court filing said.

“He attempted to live up to the requirements of his cooperation agreement and provided meaningful cooperation relating to several key areas under current government investigation,” the court papers added.

The lawyers also argued that Manafort’s state of mind was impacted by his time in solitary confinement and he wasn’t able to prepare for his meetings with federal investigators.

“While his physical safety is of primary concern, it is important to note that the conditions of Mr. Manafort’s confinement have taken a toll on his physical and mental health,” the court filing says.

Manafort has severe gout and is suffering from depression and anxiety due to limited contact with his family, according to his lawyers.