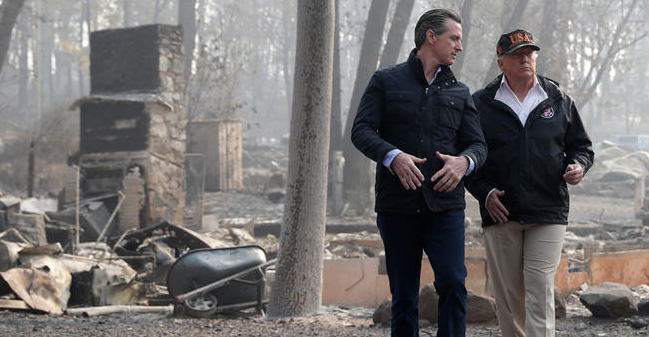 “Billions of dollars are sent to the State of California for Forest [sic] fires that, with proper Forrest Management [sic], would never happen. Unless they get their act together, which is unlikely, I have ordered FEMA to send no more money,” the president tweeted.

It wasn’t immediately clear if he had signed an order to FEMA. NBC has reached out to FEMA and the White House for comment.

Soon after the president’s tweet, Sen. Kamala Harris, D-Calif., tweeted, “Californians endured the deadliest wildfire in our state’s history last year. We should work together to mitigate these fires by combating climate change, not play politics by threatening to withhold money from survivors of a deadly natural disaster.”

“Mr. President — Just yesterday, @OregonGovBrown, @GovInslee, and I sent a letter asking the federal government to work with us in taking on these unprecedented wildfires. We have been put in office by the voters to get things done, not to play games with lives.”

“Disasters and recovery are no time for politics. I’m already taking action to modernize and manage our forests and emergency responses. The people of CA — folks in Paradise — should not be victims to partisan bickering.”

“.@realDonaldTrump’s threat insults the memory of scores of Americans who perished in wildfires last year & thousands more who lost their homes. @GOPLeader must join me to condemn & call on POTUS to reassure millions in CA that our govt will be there for them in their time of need.”

“.@POTUS seems to have forgotten, yet again, that The federal government manages 57 percent of the forests in California. The state manages 2 percent. Private owners are responsible for 39 percent. Maybe this colorful map can help! #FactCheckTrump.”

Trump previously threatened to take away funding from California in November, days after the deadly wildfire in Butte County broke out.

The November tweets caused backlash from state and local officials, as well as the International Association of Fire Fighters.

The president’s assertions have been repeatedly questioned by fire experts.

“The president’s assertion that California’s forest management policies are to blame for catastrophic wildfire is dangerously wrong,” said Rice, head of the 30,000-member organization. “Wildfires are sparked and spread not only in forested areas but in populated areas and open fields fueled by parched vegetation, high winds, low humidity and geography. Moreover, nearly 60 percent of California forests are under federal management, and another two-thirds under private control. It is the federal government that has chosen to divert resources away from forest management, not California.”

Gov. Gavin Newsom on Tuesday laid out a plan for new investments related to wildfire safety.