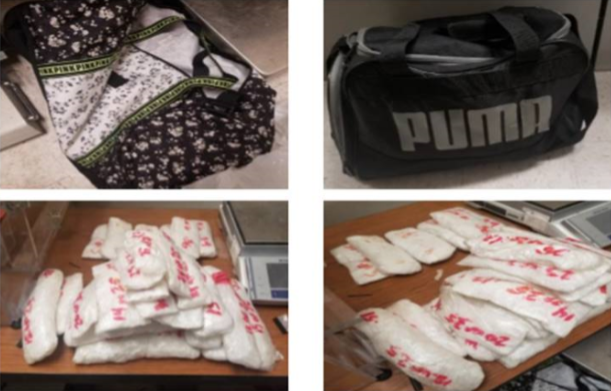 The incident occurred at approximately 8:30 p.m., when a passenger bus approached the checkpoint. Agents referred the bus to secondary inspection for an immigration inspection of the occupants.

While in secondary inspection, a Border Patrol canine detection team alerted to two unclaimed luggage bags that were in the overhead bin compartment. Upon inspecting the contents of the bags, Border Patrol agents found 31 small packages wrapped in cellophane. The agents tested the packages, it was determined that the content was consistent with the characteristics of
methamphetamine.

Upon further investigation, agents were able to determine the proprietors of the bags and arrested a 19-year-old and 16-year-old Mexican national. The total weight of the methamphetamine discovered was 10.4 pounds, with an estimated street value of $27,560.

Both subjects and the narcotics were turned over to Drug Enforcement Administration. In fiscal year 2019, El Centro Sector agents have seized more than 1,096 pounds of methamphetamine, amounting to over $2.5 million.