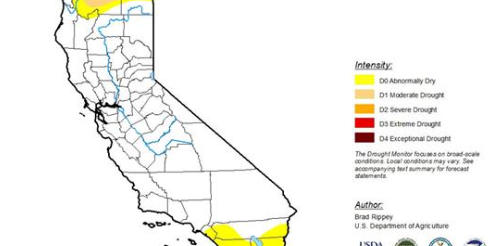 California’s water supply was in 2014 record drought conditions and just last year, the snow pack in the Sierras was only 20 percent of what was needed.

“What a difference an year and a month makes … our statewide snow pack is 153 percent average for this date,” says Chris Orrock, with the California Department of Water Resources.

And what the Sierra’s saw in snow lower elevations got in rain.

“Here in the Coachella Valley we’ve had an enormous amount of rain in January and February combined we had well over our annual average rainfall,” says Ashley Metzger, the outreach and conservation manager with the Desert Water Agency.

“Most of our state’s reservoirs are at or above 100 percent of their historical average and the healthy snow pack we’re seeing here today is great for our reservoir storage here today it’s excellent news,” says Orrock.

Metzger says lots of snow in our mountains is good news for us down here in the desert too, “That’s important here in the Coachella valley because we bring in water to make sure that we’re sustainable,” adding the valley saw record rainfall, “in January and February combined we had well over our annual average rainfall.”

Metzger says the extra water gave the Salton Sea a boost, “The rain that we received, certainly on the Valentine’s Day storm, yes, it made its way to the Salton Sea and that’s where much of the rainfall does end up in the flooding circumstances here in the Coachella Valley.”

She says this may be a wet winter but it’s important to remember water waste is still illegal in California and people should be mindful of their water use, “Even though water is abundant this year we have to always be cautious and preserve and protect our most precious resource.”