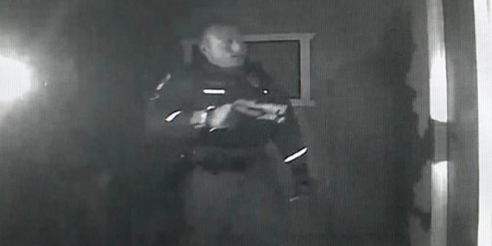 Police with guns drawn broke down the door of an Arizona home and ordered three children into the custody of the Department of Child Safety because the parents had refused to take their son with a fever to the hospital.

Sarah Beck and Brooks Bryce brought their feverish 2-year-old son to a clinic in late February and were told he had a temperature of 105, they said to NBC affiliate KPNX.

The doctor ordered the parents to bring the boy — who had not been vaccinated, according to azcentral.com — to a hospital, but by the time they got home, his fever had decreased to 102, and they decided not to.

When the doctor found out the child had never made it to the hospital, the doctor called DCS who contacted the Chandler Police Department.

When police arrived, the parents wouldn’t let them into the house.

“They said ‘Brooks, you have to come out of your house right now … We have to check on them,’ and I said, ‘he’s doing fine, his temperature is 100 degrees. He’s safe, he’s asleep, could you please just leave us alone,’” Bryce told KPNX.

At that point, officers, who said they had a warrant from DCS, broke down the door of the home, surveillance video showed.

“They saw me, and they asked me to put my hands up,” Bryce said.

The father was handcuffed while police checked the home. The couple’s three kids were placed in DCS custody.

“I mean, they treated us like criminals, busting in our door. I mean, I don’t know what kind of trauma that did to my kids. Where are my kids right now is what I want to know,” Beck said.

A police report said the officers used forced entry because there was a present danger to a child, and the parents refused to come out of the home.

The report said that when officers entered the house, they found more than one of the children had vomited in their beds, there was “clutter everywhere,” and they discovered a shotgun in the parents’ bedroom that was not locked.

The parents are not facing criminal charges, but as of March 25, they still did not have their children back.

State Rep. Kelly Townsend, who has worked on legislation requiring DCS to get a search warrant before removing a child from a home, called the incident a “miscarriage of justice and a shame to the State of Arizona.”

“This mother is nearly 9 months pregnant and her baby will be born soon. I have great concern that DCS will also take this infant over a misdiagnosis by the Dr., who thought the child might have meningitis, when actually he had RSV (Respiratory syncytial virus),” Townsend said in a statement on March 25.

“I call on DCS to immediately return the children who are also being traumatized due to this misdiagnosis,” the statement said. “The parents were correct, the doctor was wrong.”

The Arizona Department of Child Safety and the Chandler Police Department did not immediately respond to requests for comment from NBC News.