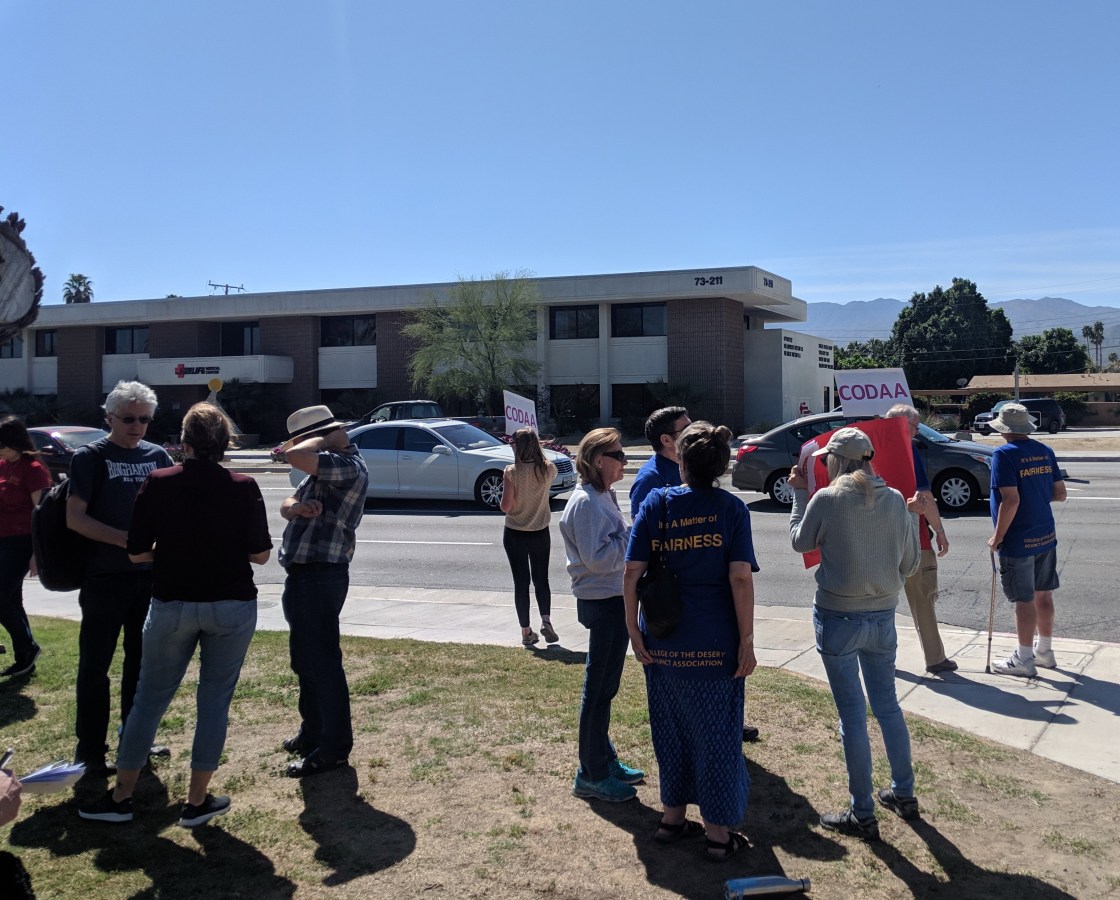 A group of adjunct professors at College of the Desert are rebelling from what they are calling “cheap labor”, as the part-time instructors claim they work the same hours as full-time faculty for half the pay.

David Bashore is the leader of the College of the Desert Adjunct Association, he has also worked at the college for 10 years as an adjunct professor of communication studies.

Bashore said, “We’re cheap labor, and so the district uses us for cheap labor to save money.”

He explains “adjunct” simply means part-time professors, although he said it is common for him to teach the same number of classes as full-time faculty for half the pay.

“We teach the bulk of the classes here there are 400 adjuncts and only about 125 full-time faculty,” Bashore. “But along with that, it means lower pay with no benefits and no job security.”

The picketing on the school’s entrances took place on the same day President Dr. Joel Kinnamon delivered the State of the College address to guests and donors.

Advocates said the demonstration is in response to the failure to reach a wage agreement for the 2018-2019 academic year.

Dr. Mark Zacovic, the Interim Vice President of Human Resources at the college said the negotiations are moving, just not as fast as the adjunct staff would like.

Zacovic said, “It just takes time and the involvement of a lot of people on both sides of the table working through the details that are included in the collective bargaining contracts.”

He adds his office is listening to the concern of the part-time professors.

The collective bargaining of contracts is not unique to C.O.D. adjunct professors from community colleges in Florida, New York, and New Jersey are all speaking out against the disparity of benefits and wages.

The professors around the nation are voicing similar concerns as the educators at home.

Bashore said, “We have no protection against retaliation, so if the administration doesn’t like me being out here right now, they cannot give me any more work in the future and there’s nothing I can do about it.”

The College of the Desert is one of the fastest growing colleges in Calfornia, meanwhile, its adjunct professors hope their wages catch up.