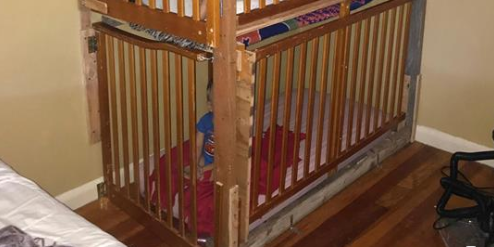 Charges of child endangerment have been dropped against two people from Modoc County- after police say children were found in secured, cage-like cribs in a home with guns and drug paraphernalia.

Modoc County Sheriff William ‘Tex’ Dowdy says the situation began Friday when an officer responded to a home south of Tulelake.  “While he was at the residence, discovered the empty shell casings, many empty shell casings about the property.”

But officers didn’t expect what they found inside.

“They found these two small children, which were basically in two modified cribs that were attached to the wall.”  Dowdy noted.

Latches were secured, preventing the the 22 month old toddlers from getting out.

Police say they also found evidence that a butane honey oil lab for processing marijuana had been used in the home.

“There were 3 firearms recovered.”  Sheriff Dowdy stated.  “Over 100 rounds of ammunition were recovered at the residence, and a small amount of a controlled substance, being methamphetamine.”

Mercadies Irene Williams was also arrested, but was released Tuesday morning on her own recognizance.

Charges of child endangerment against Williams and Zendejas were dropped at a hearing Tuesday.

Modoc County District Attorney Sam Kyllo declined to appear on camera, though he told NBC5:  “This is not a child endangerment case.”

Kyllo would not elaborate further.

After the arrest, the children in the home were placed in custody of Modoc County Child Protective Services.

Their current status is unknown.