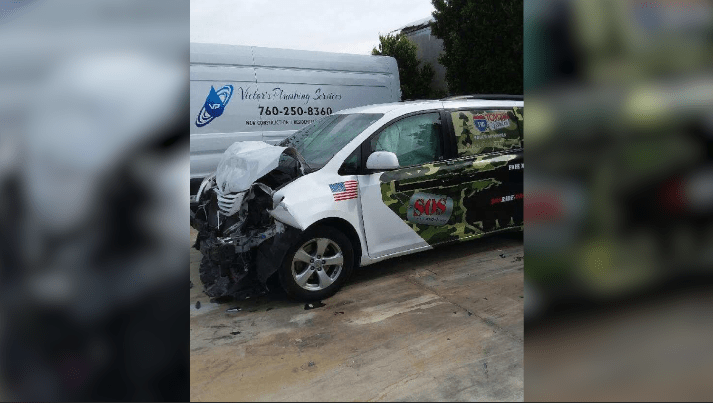 Free Marine Transportation In Jeopardy After Car Is Totaled In Crash

A nonprofit organization that transports thousands of soldiers to their families every year, free of charge, may be in jeopardy. Soldiers Organized Services or SOS has been around for 12 years. In that time, it’s been able to transport over 300,000 soldiers and their families across the Coachella Valley. However, a car wreck has left SOS with a totaled van, in need of replacement. We spoke to a family who has benefited from this service and they say, it has been a huge help.

“I didn’t believe it until it happened,” said Mauricio Arias.

Mauricio Arias, a marine stationed at Twentynine Palms is still in shock that SOS gave him a free ride to the airport.

“The only thing that they charge is a handshake and a hug, that’s all they want. They don’t want money,” he added.

Which has become cash he has been able to save, and repurpose on his newborn little girl.

“We’re going to be able to spend a little more money on our baby. Maybe diapers or toys for the baby.”

However Mauricio and his family aren’t the only ones who have benefited from the dozens of volunteers who have been transporting Marines for over a decade. Founder Erica Stone tells NBC Palm Springs that a passion project of hers has now turned into something bigger than she could have ever imagined.

“We’ve transported over 274,000 plus individuals to Twentynine Palms, which equals over 13 million miles driven, which means our volunteers have technically drive 550 times around the earth. Yes, we want to keep that going,” said Erica.

All in all, SOS has provided services to thousands of military families right here in the Coachella Valley, but its future could be in jeopardy due to financial reasons.

“12 years, we’ve never turned down a ride because we could not pay the gas, but with our van being totalled right now, we did not have that in the budget this summer. So, we’re very nervous about what to do,” she added.

Now they can’t get as many marines out to their families and this could prove to be devastating in the coming months. Mauricio says he would be very upset if this service was not available to military folks, because he knows many people depend on it to get home. It has become a service that is known to always be faithful.

“Obviously the driver is not getting paid anything. So it’s great, he actually cares,” added Mauricio.

SOS: a service that leaves no one behind.

Good news is, you can help keep SOS afloat. Monday, May 27th there will be a golf tournament honoring our veterans. Part of the proceeds will go to SOS. You can find the details below.

Deadline for signups is Friday, May 24th.