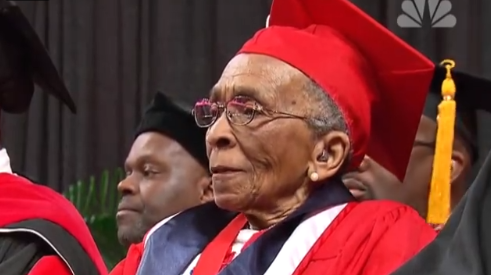 70 years in the making: 99-year-old veteran who graduated from WSSU finally walks across stage

A graduate of what is now Winston-Salem State University in 1949, who served in the US Army during World War II, finally got the chance to walk across the stage and accept a degree in person during a commencement ceremony.

On Friday, dawning a red cap and gown, Elizabeth Barker Johnson was handed an honorary degree in special education. It was a moment nearly 70 years in the making.

After the war, she enrolled at what is now Winston-Salem State University, Winston-Salem Teachers College, becoming the first female to enroll on the GI Bill. She earned a degree education in August of 1949. However, because she was working as a teacher, she did not get to walk across the stage at her graduation and instead received her degree in the mail.

Johnson is from Elkin and currently lives in Hickory. On her 99th birthday last week, she was surprised with the news that she has been invited to walk at WSSU’s 2019 commencement. She was recognized on stage with an honorary degree in special education. Johnson taught in public schools in Virginia and North Carolina for more than 30 years.

Johnson told WXII 12 News how she felt when she found out she would get to walk across the stage during the commencement ceremony.

“I was excited. I can’t explain how excited I really was,” said Johnson.

She also discussed why she had such a passion for teaching.

“To begin with I felt like dropping out but then there were so many children who were not getting the help they needed so I said, ‘I feel like I’m capable of doing it,’ so that’s why I stayed with it,” Johnson said.

“I felt like teaching school, I could reach more people who would listen to me than if I tried to choose a job among adults.

Johnson’s daughter, Cynthia Scott, said she would be very emotional watching her mom walk across the stage on Friday.

“I think the thing for me, if not for her, is to turn that tassel to say, ‘I finally did it. I’ve done it. I’m turning this tassel. I have done it,” said Scott.

“We didn’t realize all of this was going to take place. I feel very honored that they thought of my mother enough to want to be able to do this for her, knowing that 70 years ago she did not get to walk across the stage to receive her degree because she did have to work so I feel very honored and just blessed that she’s able to do this now, to finally be able to walk across that stage and actually get her degree in hand.

“Just happy to be here. Just thrilled. Really just thrilled. I really don’t know how to explain it that she is going to get to do this. I guess I never honestly would have dreamed that this would happen.

Scott also discussed what her mother taught her over the years.

“It’s a good feeling to know that I have someone whose done so much within the army and within her time here to be able to give me my first salute so it really means a lot that she’s doing that for me so I appreciate you,” said Lt. Poole.

More than 1,1000 graduated walked the stage on Friday.

Johnson was seated on stage with other special guests. When she arose to grab her walker and walk across the stage, she was fueled by the roar of a standing ovation from her fellow Rams. Before her stood row after row of millennials in red robes cheering her on in celebrity fashion.

“It’s special, it’s extra special,” Johnson said after the ceremony. “One time I said I’m not even human. This is not me receiving this. At this age? But I mean I feel good about it. Really, really good.”