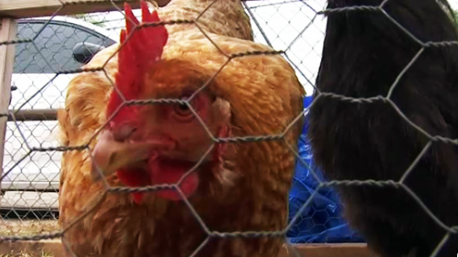 Residents were protesting in the Inland Empire Monday over the killing of thousands of chickens that were euthanized to prevent the spread of a virus.

Newcastle disease is a virus that can have devastating results on the poultry industry in California, according to the State Veterinarian of the California Department of Food and Agriculture.

A family in Mira Loma was devastated after they were told by state officials that their chickens were to be destroyed Monday. A Riverside County Sheriff’s Deputy had to respond to keep the peace at a protest outside the family’s home.

The owners said it’s not fair and that in many cases, healthy chickens are being killed off in the process.

Then Cellphone video of state workers killing chickens at a property in the Inland Empire further sparked backlash.

“We definitely understand the impact this has on pet owners,” State Veterinarian Dr. Annette Jones said.

The Newcastle virus has to be eradicated or it could have devastating effects on the poultry industry in the Inland Empire, Jones reiterated.

“Unfortunately, because there is no cure for the disease. The only thing that we can do to stop the spread and protect community after community is to euthanize those birds that are infected in the area where there is a lot of confirmed virus,” she said.

Some protesters say they have had their chickens tested and come up negative for the virus.

But they claim that the state is still killing their chickens as only a precaution.

“We are all Americans. We are not a Third World country, and we need help,” Terry Barcelo said.

Protesters were demanding that state officials stop the killing and find a different solution.

“Our chickens are healthy. We love them. My kids love them. Please stop. Please, I beg you, stop,” Cruz said.

State officials say this virus does not affect the food you eat — it only affects the chickens.

So far, more than 1.2 million commercial and backyard birds have been euthanized in Southern California.