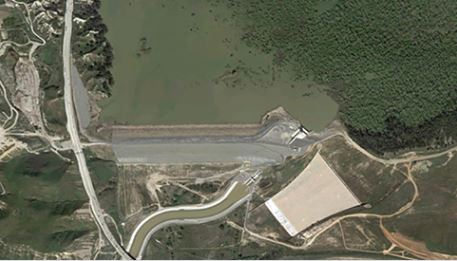 A recent assessment has raised concern about the potential for failure of the spillway of a flood control dam on a Southern California river where 1.4 million people live and work downstream, according to the U.S. Army Corp of Engineers.

The Corps said Thursday it has changed the risk characterization of Prado Dam from moderate urgency to high urgency. Prado Dam is located on the Santa Ana River in the city of Corona in Riverside County southeast of Los Angeles. Disneyland and 29 cities, including Anaheim, Santa Ana, Orange, Costa Mesa and Newport Beach, are all along the river’s path to the ocean.

The 96-mile river typically has little water flow except during winter storms and the dam is typically dry.

The dam, about 30 miles upstream from the Santa Ana River’s confluence with the Pacific, was built in 1941. An assessment this month indicates potential for poor performance of the spillway during a “significant flood event.” Risk areas include Anaheim,

“Our concern right now is about the concrete slab of the spillway and how well it will perform if water were to spill over the top of the dam,” said Lillian Doherty, the Army Corps’ division chief, according to the Los Angeles Times. “We will determine whether or not it is as reliable as it should be.”

Work on the spillway will begin in 2021.

Doherty said her team with work with experts to determine risk-reduction measures.

“Public safety is our number one priority,” said Col. Aaron Barta, commander of the U.S. Army Corps of Engineers Los Angeles District. “The primary objective of the Corps’ Dam Safety Program is to review our dams and ensure resources are prioritized to address the highest risks.”

The analysis comes more than two years after a dam spillway crisis at the nation’s tallest dam forced evacuations in the Northern California town of Oroville. A concrete spillway at Oroville Dam crumbled during winter downpours in February 2017.

The Corps determined later that year that the Whittier Narrows Dam, a 60-year-old structure about 40 miles west of Prado Dam, was structurally unsafe. Engineers found that storms could cause a premature opening of the dam’s spillway, unleashing water in the directino of more than 1 million people who live along the San Gabriel River floodplain.

It will cost about $600 million to upgrade Whittier Narrows, according to the Corps.