Veteran in California impaled by tripod thrown from highway overpass

A man in Sacramento was arrested for attempted murder for allegedly throwing a stolen tripod from a highway overpass. The object impaled a man identified as a military veteran through his lung as he was being transported in a van that passed under the bridge.

Tim Page, a volunteer for service organization El Dorado Veteran Resources, said he was driving a veteran he picked up from the Sacramento International Airport on Thursday when a yellow object hit the windshield. “It was like a dream, for lack of a better description,” Page told NBC News affiliate KCRA Friday night. “It was very scary.”

The tripod, which police suspect was stolen from a transportation survey crew, went directly through the veteran’s lung and broke his ribs, Page told KCRA.

The California Highway Patrol arrested Matthew Adam Thompson, 32, whom they identified as a transient currently living in Sacramento, for allegedly throwing the tripod from the overpass.

Police said they are continuing to investigate the incident.

Authorities were able to identify Thompson as a suspect after watching surveillance video of the tripod’s theft, the highway patrol said in a statement. When they first made contact, police said Thompson attempted to flee and led them on a foot chase.

The injured veteran, who was not identified, is expected to make a full recovery.

This is the latest in a series of incidents of people throwing objects from bridges that have killed or hurt passing drivers.

A Texas mother died in March when a large rock was thrown from an interstate overpass and hit her car, and in November a driver in Tennessee was killed when a large chunk of concrete was thrown off a bridge.

In Michigan in 2017, five Michigan boys were charged with second-degree murder after one of them threw a rock off a bridge, killing a driver.

Four of the teenagers accepted a lesser charge of manslaughter last July, while the boy who threw the rock pleaded guilty to second-degree murder in October. 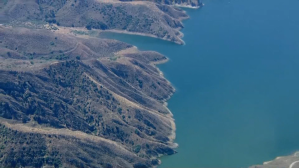