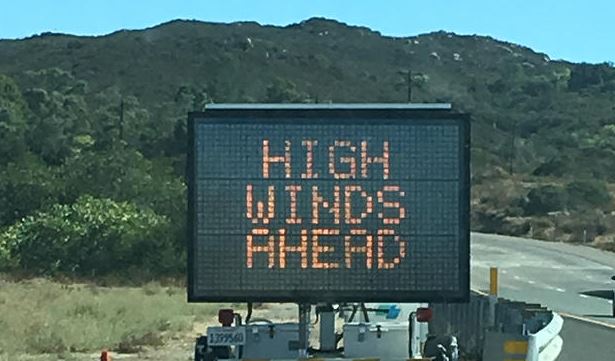 Winds gusting over 60 mph could whip up blowing dust and cause other hazards in the Banning Pass and throughout the Coachella Valley through Tuesday night, according to the National Weather Service.

The agency posted a Wind Advisory until 11 p.m. Tuesday as a cold front pushes through the region, generating strong gusts, especially along ridges and in mountain passes.

According to the NWS, wind speeds will likely range from 20 to 30 mph, with gusts as high as 65 mph in isolated areas, mainly during the day Tuesday.

Driving conditions could be impacted by blowing dust and debris. Drivers of high-profile vehicles were advised to be particularly wary of using desert roads, or going through the Pass, on Tuesday.

The next significant chance of rain begins Tuesday afternoon and continues into Thursday night, though precipitation amounts are predicted to be low, forecasters said.

High temperatures will hover in the upper 60 and low 70s most of the week in the Riverside Metropolitan area, while in the Coachella Valley, the mercury will climb toward 80 degrees, according to the Weather Service.