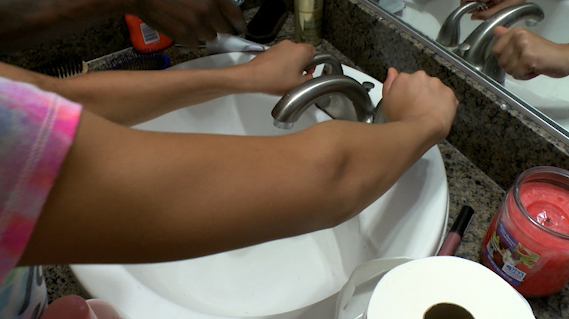 After water service is shut off at Watercrest Apartment in Indio, some tenants were forced to use pool water to flush their toilets. The water was shut off on Sunday and likely will not be fixed until Tuesday according to apartment management.

“This water will not work,” exclaimed one of Chris Thompson’s four kids. Thompson is a resident at Watercrest Apartments.

Thompson said since their water has been shut down, his family has essentially been camping out for Memorial Day weekend in their own home. They have bought several gallons of water to do the essentials.

Residents told NBC Palm Springs there was little communication from management. Their only source of information was a note on the leasing office window that said a “vehicle ran into the main water valve backflow.” The note also said the water would likely be fixed by Tuesday due to the holiday weekend.

“The only response we got was them not answering their phones,” Thompson said. “Probably because there’s so many people calling.”

“They’re on you if you’re late with your rent,” Jess Thomas, the father of a tenant at the complex, said. “You don’t pay your rent you’re going to get the late charge, they don’t negotiate that but the residents try to negotiate something like this, they look at them like they’re crazy.”

While NBC Palm Springs was at the complex the assistant property manager showed up but chose not to comment. Indio Water Distict also declined to give an comment.

“This is supposed to be a luxury apartment but it’s not feeling so luxury right now,” Thompson said.

For now, it’s a waiting game as workers assess the serious damage and notify the apartment complex. Residents hope the water will be running again on Tuesday but there’s still the question about compensation for the days without services.